I think people are just bored. Or they need to get a life. For if some kid says the Pledge in Arabic, it’s now international news. So this is a problem worthy of international attention?

I wonder if the people objecting to this realize there are homeless people in their town who need help? Or if they can point out where Boko Haram operates and why they’re a threat to all decent humanity? As a human race, we seem to sweat the small stuff now, while we ignore the bigger picture. Thank smartphones. And a complete lack of cultural vision.

So a kid said the Pledge in Arabic, so what? What if he said it in Spanish, or Japanese? Who cares?

First off, the Pledge was only written in 1892. And formally adopted by Congress during World War Two. As a general rule, I take it very cautiously when somebody tells me an act is a patriotic duty if it’s that recent. If George Washington or Abraham Lincoln didn’t do it, well, then don’t tell me the Republic depends on it.

Second, the Pledge itself is kind of creepy. Very Cold War. Why do kids Pledge allegiance to a flag, an object. I get it, the Pledge also says “…and to the Republic…” and so on. But you know what word isn’t in there? “Constitution”. As in the thing that guides us all. It’s not in there. Weird.

Third, the Arabic part. Seriously, who cares? In 1892, I bet you kids said the Pledge in German and Italian too. And somehow this didn’t detonate the country. Part of being free is being able to speak in any language you damn well want.

Fourth, if we’re going to mandate the Pledge, and mandate you say it in English, I don’t want to live in that country. Are we going to start arresting kids who refuse to say it, or if they don’t it in English? What about having all adult workers say it, in English, before they clock in. If they refuse, the boss clubs them in the throat. That’s not freedom; that’s Soviet Russia garbage.

Freedom is about choice. Duty, honor, patriotism aren’t thing that can be mandated by The State, by politicians, by government. You have to choose them, and live the freedom that comes with them. Let kids say the Pledge of Allegiance in whatever language they want; or not at all. Otherwise, the Pledge is meaningless. 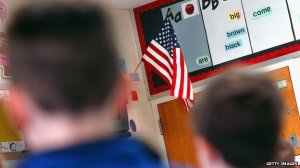