There’s a tale, I suspect an apocryphal one, where Ben Franklin asks whether the half sun on the high-backed main chair in Independence Hall is of a rising or setting sun. He figured it was rising, to signify an emerging young nation.

Well, in this picture I took from the middle of nowhere Jordanian desert, for the life of me I can’t remember which one it was.

Seriously, I’m not sure.  Don’t tell me which one you think it is.  It’ll ruin my fun.

Drive fifty miles in any direction from Jordan and you’re likely to get shot. Or at least fear for your life. They’re just hanging on, but doing it rather well seeing as how their entire region is on fire.

I’d rather unknowingly spend another night next to this guy than have to watch even one ISIS motivational video.

I think a lot of it has to do with the leadership of Abdullah, who as far as dictator overlords go, has managed to retain total control without:

1) Degenerating into a total tyrannical asshole

3) Racking up a body count worthy of Satan’s ghost

I attribute a lot of this to his decent personality and that a lot of the house cleaning was already done by Daddy. Depending on how you count, Hussein bin Talal might have killed folks into the five-figures.

Could Abdullah do it too? I think so. I think he has it in him. If it really came down to it. Particularly given what he’s seen happen to neighboring countries that dispense with their bosses without really thinking things through.

Remember this photo of him from a few months back: 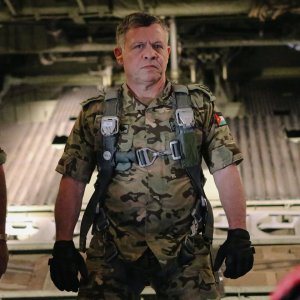 Everybody talked this up like he was some warrior monarch of old times. Well, that’s true. But I also think he had this photo taken for a domestic audience. He’s screaming from his mind to anybody dumb enough to get any bright ideas: “Don’t fuck with me. I’m not going out like Hussein or Assad or Mubarak. I’ll burn you to the ground if you try. Don’t you ever fuck with me.”

Is this type of behavior cool? No. Am I going to question it now, given how else other things are going in that region? No.

He’s on the spot. He has to lead using his best judgment. The entire Western world has basically decided Jordan is on its own. The three airstrikes a week the West offers isn’t going to keep Jordan safe. Abdullah has to do that. Dude’s got the hardest job on the planet after Bear Baiter.

I loved Jordan. I loved the people. Not to be racist, but they were the only Arabs I’ve gotten along with in my travels. They’re normal people, they’re not elitist. They told me that’s because their country didn’t have any oil. They came up hard, and have to work hard. Maybe that’s why their country isn’t burning like all the others.

Like a lot of people I love the desert because there’s almost nothing there; nothing, but everything.

I’m not able to go back there right now. But one day, when peace returns. I’ll be there.

One thought on “Jordan – sun rising or setting?”