Just as a reminder, here is the video of McGregor sucker punching an old man square in the face in a Dublin pub for refusing to drink his “shite” whiskey.

Conor’s walking around with his bottle and handing out free shots.  Conor lays the plastic cups on the bar and the old man emphatically takes two of them and slams them back behind the rail.  Conor didn’t take this well and like all true gentlemen responded with cowardly violence.  Conor has to be physically restrained by his handlers otherwise I guess he would have kept wailing on this guy?  What a piece of shit.

So if you want to drink Proper 12 (my Guests and I aren’t sure why anybody would particularly when there are 271 better whiskeys available) in case you were tempted we propose the following.  You can drink Proper 12, but if you have to take a bare knuckled punch to the face from that old man.  You might not think this is a big deal, but:

Do you want to fight that old man?  We sure don’t.  Don’t drink Conor’s shite. 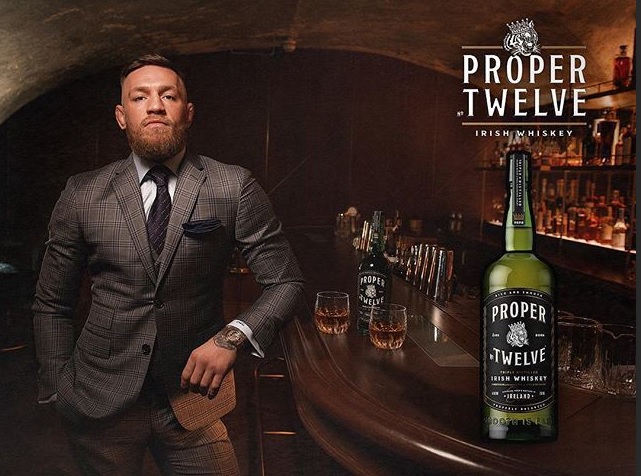 spot the shite in this shot

Just about a whole bunch of people are wearing green in the office today. I’m not exactly sure why, I don’t get it. Genetics-wise, I’m about 50% Irish, and I still don’t get it.

I mean in the old days you would get pinched if you weren’t wearing green. So you had to wear green. But those were the good old days. Nowadays pinching somebody on Saint Patrick’s Day would speedily result in a sexual assault conviction and/or lawsuit.

Quite randomly, I’ve been on a bit of an Irish haul lately. This last weekend I binge watched (in between working both days) Peaky Blinders. Without ruining the plot, the 1919-1922 pivotal years of Irish history are intrinsically tied to what’s going on throughout the events of this otherwise English gangster saga. This series is pretty good, I thought the first season was just awesome. Unfortunately the second season degenerates into a mix of Godfather, Sopranos, and Boardwalk Empire. It’s decent, watchable stuff, but it’s all been done before. They even take certain themes shot-for-shot from these other series. But at least you get Cillian Murphy and Sam Neill, who are so entertaining you could get them on screen watching third tier soccer in a bar and it’d be entertaining. 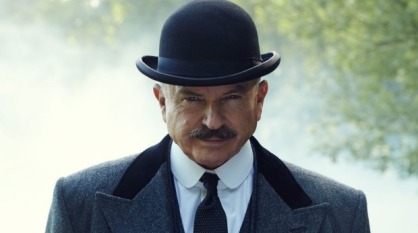 “As a villain, I’m so fucking awesome.”

Cillian Murphy is also in another Irish themed saga of this era called The Wind That Shakes the Barley. Depending on who you ask, this movie made Murphy’s name. As you can tell from its high-minded title, it’s not a lightweight journey. People love this movie, they shout it to the horizons. I however, didn’t quite care for it. It was preachy and predictable. It devalued an incredibly complex civil war into the usual, brother fights brother tale, where one dude is the romantic and the other guy plays it straight. Likely Peaky Blinders, it’s imminently watchable stuff, but it’s all been done before. I know I’m definitely selling this flick short, but as emotional as you’re supposed to be, by the end, I didn’t feel, like, things. I didn’t care what happened to either of these guys. Maybe that says something about me? Anyways, I wonder how many folks wearing green today have even heard of the Irish Civil War though?

Hmm, based on how they’re dressed, I wonder which one is going to end up Anti-Treaty and the other Pro-Treaty?

I’m currently reading my Granddad’s copy of A Bridge Too Far, which by some miracle I’ve never read before. The lead element of the Allied ground advance for Market Garden was the Irish Guards. Which despite their name, were recruited only from Northern Ireland. While most of the rest of Ireland essentially sat out World War II, despite the many individuals who volunteered for British units, or the limited clandestine help the Irish government provided. Which, I kind of get, given what the Irish people would have thought about the English. But to which I’ve always found troubling, because it’s like, “Hey, uh, you do know, what Hitler would have done to Ireland, had he won? Right?”

But then you also have to step back and consider that Saint Patrick’s Day isn’t typically about Ireland or the Irish, but rather the Irish diaspora. So unless folks happen to hail from Puerto Rico, or Lebanon, or the Philippines, then I’m not quite sure any similar national concept applies. Except that, by raw numbers, there are probably more German descendants in America, than Irish. But there’s no rough Duestch equivalent to Saint Patrick’s Day, that’s so widespread, so known. The recent Oktoberfest craze is too new, is not just one day, and is in case nowhere near as big.

So what’s this Irish thing anyways? Perhaps it’s simply not enough for some, to just check the American block and call it a day? That they need / want a deeper connection that predates 1607?

Or is to wear green and play crazy, wacky dress up, like Halloween?

Or is to find an excuse to go drink with friends on a weeknight?

Or how about to celebrate and enjoy a non-standard event that still binds people together across all walks of life in an increasingly separated, smartphone divided world?

How about all of the above.

None of these are bad ideas. If they bring people together, and don’t result in people getting too many beer steins cracked over their heads.