So the debate is whether movie theaters are bound for the crypt because covid walked in and spoiled the popcorn machine. To me, whether theaters are doomed has been in my brain for years and had nothing to do with the virus messing with the screen focus.

The problem with theaters is the ability to put out quality movies that people actually want to see. Box office receipts have been decent for years, but not at the level you’d expect for an industry that should be growing in proportion to the population.

I attribute this to a movie studio model that chases big blockbusters with about 95% of their energy, and maybe leaves a little 5% left over to take some chances. For the most part, there’s not room for the spark hit or decent medium budget flick anymore.

Plus, all the big blockbusters for about a decade have been superhero slop. Hey if this is your thing? Okay, I get it, sort of. But it’s not mine. I haven’t seen a superhero movie in, since, uh, um?

I think they have an eighth actor to play Batman now. It’s John Wayne’s ghost! They dug up his mortal remains, cloned him, trained him to talk in an even more guttural voice, and he’ll endlessly punch faceless bad guys to no purpose for a run time of 2 hours and 43 minutes. This movie will make $1.3B.

Then there’s the darker side of the Hollywood equation, the dominance of China. China is now the world’s largest box office and it won’t be close. They don’t even have Netflix to compete with theaters. Mulan is out this week on China’s screens and America’s small squares. It will make $1.3B.

Never mind the script was run past the Chinese Communist Party censors or that that lead actress thinks pro democracy protestors are losers. These are minor considerations when you’re trying to make money in China. Just ask the NBA.

But if you’re like me and you want quality, open thought, risk taking, and generally not seeing movies that feel like they emerged from a vending machine? Well, you need to get rid of superheros, and China’s deep Hollywood influence.

Well kids, that ain’t happening. And so to me, covid aside, this a business model set up for failure. They’re just begging Netflix or Amazon to eat them up. Movie theaters will be where you go see classic movies back when they made movies that were actually good. Or theme park rides like in Universal Studios, or 4D experiences, or Big Brother mind control centers, or whatever.

Meanwhile, if you want to watch real movies, you’ll have to stream or buy blu ray versions of old films from back when they made actual movies. And there’s no better example of that in Mad Max: Fury Road. Which is all of five years old at this point, but feels like it was made a century ago.

This will be a short review because I consider it boring to write a seventeen page piece on just how awesome every part of this movie is. The problem is that it lost money, and so Hollywood’s never going to take such a risk again.

Let’s face it, Max is in the promos with this weird face mask on, Charlize is bald and looks angry, there’s a dude with a guitar that shoots fire. I think mainstream audiences saw the trailer for this movie and immediately checked out.

It’s their loss because they missed one of the best action movies in history. A movie that also had heart, characters you cared about, and didn’t beat you over the head with some kind of overtly cultural/political message.

This all comes from the mind of George Miller who’s an elderly crazy man only famous for Max movies, and other massive cult hits like Babe and Happy Feet. This movie is worthy of an insane asylum, but to me that’s a positive when ever superhero movie is written by twelve suits in a boardroom. 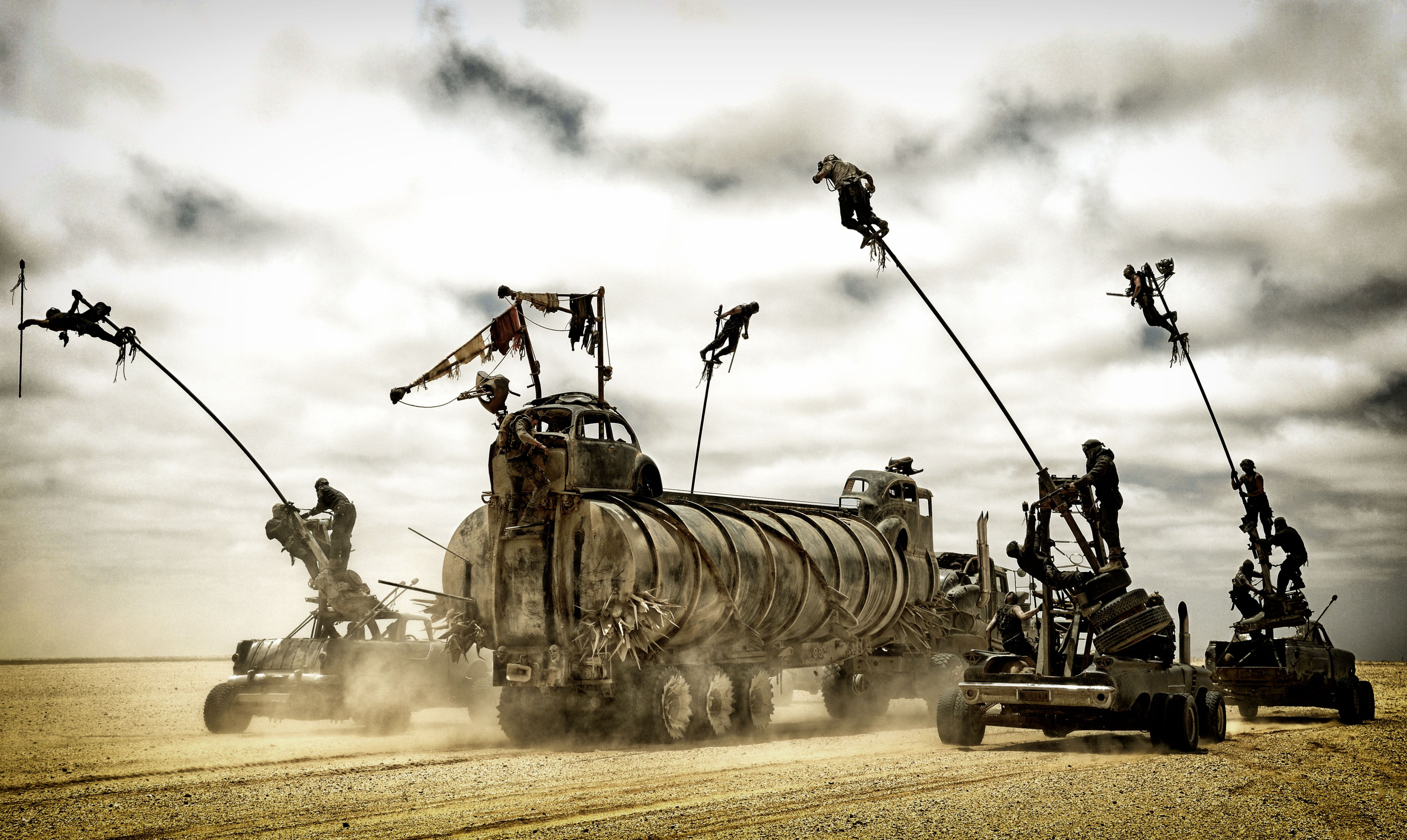 this is not a computer generated scene

1) Hardy is awesome as Max, says about twelve words in the whole movie, but is such a talented actor that he does the rest through facial expressions alone

2) Theron is the real star / hero of the movie and that’s the point, I don’t usually like her as an actor but in this role she’s perfect and it’s her performance that grounds / drives this movie

3) Miller gives you a story you instantly care about (unless you’re psychotic), a brave woman is attempting to rescue of a gaggle of pregnant women from an extremely evil dude = sold

4) The plot starts five minutes in, the film doesn’t mess around with your mind or time, it gets right into it, and you’re hooked

5) The film has some of the most mind bending, realistic, and baffling action ever put on screen, even when I rewatch this movie I still find myself gripping the couch arm

6) Sure they used some visual effects, but much of this movie was shot on site using practical effects, which is why it looks so awesome and probably also why it was so expensive to make and thus part of the reason it lost money

7) All the craziness in play is such a positive to me, Max is strapped to a car for the first action scene as a literal blood bank, the second action scene he’s still chained to a lunatic, all the different looks for the weapons and vehicles, the guitar that shoots fire, a religion that worships an altar of steering wheels, all positives for me

8) Max and Furiosa each undergo their own stories of redemption, pain, and ultimately end the movie once again giving a shit about people and things, all accomplished without overly dwelling on it or portraying either of them as enraged, miserable lunatics

9) The action, I mean, damn, some call it the best action movie of all time and they might damn well be right

I could go on and on. This movie’s not for everybody, but it sure works for me. And I wish it worked for a lot more people too. I hope it’s done a lot more on budget with streaming and blu ray so the studios will take more risks like this.

But I doubt it. Remember movies? Here’s one of them. Enjoy it. There won’t be too many new ones coming out like it ever again.