This seems like a relatively uncontroversial topic to wade into. Nobody’s got strong feelings on this one at all. But we’ll put our own belligerent spin on it; for that’s what we do.

Let’s start with some numbers:

– There are 81 million humans in Germany today

– Give or take a few million, there are approximately 50 million global refugees currently displaced due to armed conflict

– Give or take a few hundred-million, there are about 1 billion folks who live on about $1 a day

– A ballpark estimate says in 2050, Germany will have about 72 million people over half of which will be old folks

So a few belligerent observations:

– Even if Germany was populated by angels, they don’t have the bandwidth to house even a fraction of the world’s war refugees, let alone everybody’s economic migrants.

– But nobody in Germany (or in much of the rest of the developed world) has yet to crack the code on how they plan to pay for all that government spending / debt in 2050 when almost one-third of their populations are retired old folks.

– So whether anybody admits it or not, in order to stay solvent, Germany has to either let more refugees in, cut government spending by astronomical levels, or start having more German babies.

– I’m an idiot, but I’m pretty sure the German state (and all the other countries too) isn’t going to be cutting government spending or forcing women to get pregnant. So guess what option they have to take?

Germany and the rest of the modern world need to do more to tackle these problems at the source. For instance, if millions of Syrian refugees want into Germany, then we need only ask the question: Why is Bashar Assad still alive?

Europe has let Syria fester for four years. Did they think there wouldn’t ultimately be consequences given how close Syria is? How long do you think it’ll take before half of Libya tries to get in on this as well? Or what about all those folks in Cameroon living on $1.37 a day?

Solving Syria and conquering poverty are probably two of the hardest things you could ever try to do. But there are consequences to doing almost nothing in Syria and doing far, far too little to tackle global poverty. And in today’s case, those consequences are literally showing up at the West’s door.

choosing destiny for the planet

It’s cool to distract ourselves from the crushing reality of life with neat little treats, right? Look everybody, it’s a creepy solar powered robot directing traffic in a destitute country. How awesome is that! Well, not at all. If you think it is, as apparently half the modern news media does, you need to go first in line when the machines conveyer belt us all into the incinerator.

I don’t get the fascination with the two Kinshasa robots. In a broken city of ten million dominated by poverty, crime, and corruption we get a series of one or two paragraph articles from our wise, establishment journalists about a faceless little robot that replaces a transportation cop. This just displaced the human to walk a beat so he could get cash. When he’s stuck in the middle of the traffic circle, he can’t demand money.

I want to know how much these robots cost and then how much sleaze occurred just to get them built. Don’t ask the news idiots for that information; they’re not in the business of asking hard questions. They were too busy interviewing the Congolese officials, who bought a new refrigerator off the bribe cash they got, how they put the robots there.

Or maybe I’m wrong, it seems even the most impoverished soul loves the robots because they actually do their jobs and can’t request currency. So they’re superior to your average Congolese enforcer. Hell, they’re even better than any human, anywhere.

Let’s build more of them! They can perform all kinds of delightful tasks:

a) Cure Polio – Militant religious (not religious) assholes will have a real hard time assassinating a polio vaccination worker made of titanium.

b) Banish Malaria – Since we as a human race can’t afford to issue everybody six dollar bed nets, the robots can stand guard and zap mosquitos that approach at night.

c) Purify Potable Water – The robot will stand next to your putrid source, extend a pipe from its groin into the water, and then produce ready to drink liquid from his hand into your container of choice.

d) Execute Justice – A black cloaked machine will preside over the courts and interpret the law impartially using a wide database of past legal history. Verdicts will surprisingly be rendered without considering the influence of financial wealth and/or death threats.

e) Enforce the Righteous Arm of Morality – Thug androids made of tungsten will patrol the beat with all government and law enforcement officials. Said machine will be preprogrammed to identify the chemical reactions present in the skin and brain of an official demanding a bribe. If observed, the thug robot breaks the legs of the offending individual with a pipe.

I mean honestly, why not, it’s not like we’re going to do any of these things ourselves. 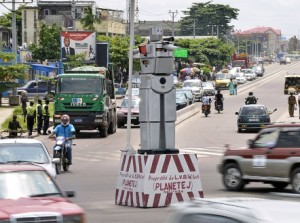 I live only to serve the public. Your adoration is enough to fuel all my physical and spiritual desires.