Once upon a time, twisted folks who desired to attain wealth and power had to get up front about it. So Caveman One could take the mastodon leg from Caveman Twelve, but he had to be prepared to club fight for it. Or Caveman One could have beat Cavewoman Sixteen for no reason at all, but he must have been aware that Caveman Sixteen might try to slit his throat over it.

And so this construct has roughly guided unbridled human behavior for millennia. Folks still exercise power this way in an alarmingly ancient fashion. Just ask your Iraqi, Zimbabwean, Qatari, or Russian neighbor.

But our super-modern (ancient) world has also created a new way to attain the same level of wealth and power without running the risk of having your skull cracked with a club. It’s called the institution. The institution can be a bank, a political organization, a homeowner’s association, a music club, and so on.

These institutions are granted inherent power simply because they exist; whatever their original purpose. Once a guy or gal rises to leadership of said institution, they are granted a level of non-violent strength unthinkable under any normal human construct. Then this power they wield can quite literally turn them into crazy people.

Not every governor of Illinois, Goldman Sachs banker, or tyrannical pool club president woke up one day and said:

“I’m going to be a horrible person.”

“You see that guy who opposes me; I’m going to claim he kidnaps puppies.”

I mean, some of them do. Some people are really messed up. But mostly, I think that institutions can wreck people’s center-of-gravity. It gives them the temptation to go above and beyond the realm of decent human behavior.

Of course, any of us is personally accountable for each and every action we take. But if you own a flower shop, your opportunity to become a world class thief is rather slightly less than if you work on Wall Street.

And so when Sepp Blatter gets elected to a fifth term and basically looks around, laughs, and gets away with it. All I can do is chuckle. He’s not necessarily the problem. FIFA is the problem. In a different life Sepp would be a failed pawn shop owner. But because he heads the institution known as FIFA, he’s one of the most successfully openly corrupt men on the planet.  Dude’s got more Russian and Qatari cash in his pockets than a sixteen-year-old-dual-blood-Arabian-Cossack-princess.

I’d wager, guesswork, that if you picked ten random humans off the planet’s streets and made them president of FIFA that nine out of ten would become corrupt losers too. And so the only way out of this mess is not to get rid of Sepp; it’s to get rid of FIFA as it currently exists and start over.

But nobody’s going to do that. Because apparently 133 countries are quite happy with the institution known as FIFA exactly as is. So the only way UEFA can win is to literally detonate FIFA by walking out entirely. They won’t do this because they’ll do what most Europeans do today when they see a crisis: They muddle through.

And so here’s to many more years of Sepp. Humanity’s representative new caveman creation. You’ve earned it dude. Cheers! 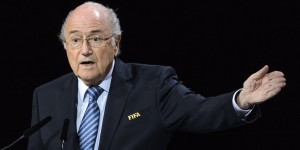 How the fuck do I keep getting away with this shit? [hmm] Eh [shrugs], whatever, fuck it. [lights cigar with cash & orphan’s tears]