I feel like I’ve broken six laws of nature.  And thus nature’s waiting for me inside my hotel room armed with a half-crumbled-brick.  When I woke up this morning I think it was about 11 degrees outside.  Now having recently departed the aircraft it’s probably about 60 degrees warmer, minimum.  I know there are others who have experienced greater temperature variations than this, but for me, this one’s the largest thus far.

It makes no sense.  We caveman losers were never designed for such things.  As it slowly got colder, you lit a fire.  As it got warmer, you sat under a tree.  The progression was slow.  Well, no longer.  Now, in a matter of hours you can change seasons.  It’s just weird.  Don’t get me wrong, tomorrow I’ll be fine, and I’m not objecting to avoiding 11 degrees.  But just the lunacy of modern life is rather strange.

When you think of it, we’re just not equipped in our modern culture to even deal with temperatures anymore.  We go from room temperature residence to room temperature car to room temperature building to room temperature plane and nature is just an annoyance in between.  And then you hear on the news of kids getting eye diseases because they spend too much time looking at little squares indoors now.  So I guess playing outside is now as rare as music and/or shitty blog posts without needless profanity.

Eh, fight back.  I’m taking advantage of the positive temperature change to go for a very long jog that doesn’t actually implant ice crystals into my lungs.  And then we should all go camping as a human race together.  And drink a lot of beer outdoors while just dealing with whatever the temperature is.  And then I’ll turn off my heat and/or air conditioning for a day a month just to remember how lucky we are.  Except then my dogs would object, conspire, chloroform me, and turn the system back on. 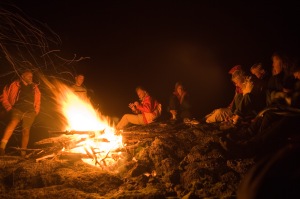