Trying to predict the future course of human events is a pointless exercise. We’re too complicated. Even belligerent time-traveling aliens find us an enigma. If anybody wearing a sharp suit or creepy cloak tells you they’re good at the future, particularly if they demand money for it, hit them with a plastic bat until they are unconscious.

Only my guests and I are allowed to ridiculously predict the future. It’s what we do. If you’d like to give us money for it, we won’t object. Just please provide me your financial institution, account routing number, and a list of all your treasured assets. We’ll take it from there.

Anyways, if you’re not up on what’s happening in Hong Kong you should, you know, read something. So go away, read up, and come back. I’m not going to provide a link. Go find a reasonable publication on your own and become smarter. Because every sentence after this one is about to make you dumber.

1) Most of the goons roughing it up with the protestors are not under the pay of the State, but are average dudes pissed off that their lives are disrupted; but you’d better believe some of the folks throwing punches are plainclothes PAP thugs

2) This means there is a substantial portion of Hong Kong’s citizens who are too stupid or shortsighted to realize the consequences of three or four more decades of life under Communist tyranny; they need to think about their grandchildren and a lot less about their next paycheck

3) The protestors didn’t take our advice, who would, and seem committed to wait it out; the negotiations aren’t going anywhere because neither side seems interested in compromise

1) The protestors are going to sit there and hope something (???????) causes the Reds to compromise; this will not happen because if nothing else, see previous bullet (2)

2) Eventually the Reds are going to decide they can’t let this last forever; but you’ve got to hand it to the demonstrators, they’re fervent, and will stay on site in large number

3) The PAP are going to have to clear them out by force and when this happens it’ll get ugly; but the PAP will probably go smart with it, tear gas, pepper spray, etc, so fatalities are going to be light

1) Politically nothing changes in Hong Kong; 2017 election concludes with Beijing appointed tool winning election boycotted by at least half the population

2) The facade of Communist paradise lunacy is further dented as the world, and China’s ever-more-internet-connected-citizenry watch tens-of-thousands of armored infantrymen hammer their own brothers and sisters in the streets of one of the planet’s most modern cities 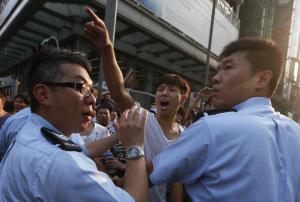 Attention Dictatorship; a decade or two from now these cops are eventually going to realize they can’t sleep at night; then what?