I get the idea that the very first civilian air passengers rode in prop driven aircraft where the plane’s bulkheads were so thin they all had to wear earmuffs.  They endured less noise than we do.

About every sixteen seconds the airport reminds you to:

– leave the bags in the open concourse and walk away

And so on.  Some airports go further and take the opportunity to utter numerous propaganda statements about how great the local city is.  Others play elevator music so bad it would drive Satan insane, and he’s a pretty crazy dude.

And some airlines, United, will actually use your divided attention to hock their credit card and frequent flyer programs like they’re Turkish bazaar dudes.  This makes me want to call the president of United and ask him why he’s such a jerk.  I’m sure he’d take my call right away.

But, on the other hand, the dude sitting next to me on the aircraft yesterday was utterly baffled by the seatbelt.  He seriously couldn’t figure out how it worked.  I thought maybe he’d had a few drinks and that explained it?  Nope.

I think he was glad he received instructions on how it worked. 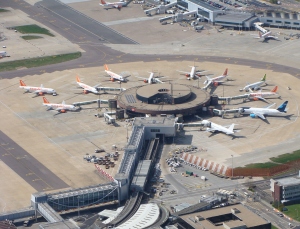 Oh, please, be quiet.  I just want to travel.  Please leave me alone.