When the Greeks were asked to vote last weekend they returned Syriza to power and thus explicitly endorsed the most recent EU backed bailout plan. That same plan also required the endorsement of Germany’s parliament among several other national elected bodies. In other words, democracy and the votes of individual citizens came into play.

Maybe the EU council thinks they can dictate refugee / migrant policy over the heads of all / some amount of voters. But I doubt it. So when the Czech Republic government refuses to take their mandated allocation quota of humanity, what’s the EU council going to do? Fine them?

The guidance states: “Financial penalty of 0.002% of GDP for those member countries refusing to accept relocated migrants.” Ah, I see. Well, what if they don’t pay up? Then what?

Hungry and Romania are full EU members; the Czech Republic, Slovakia, and Finland are all in the Euro. What happens if they’re forced to implement this policy against their will or what happens if they ignore it, and nobody forces them? Either way, the entire construct of the EU could come apart.

What happens to modern Europe if the EU comes apart? Or massively shrinks?

You can think this is a good thing or bad thing, but either way it’s monumental and rather fascinating. When the Syrian war started four years ago I’m not sure anybody would have predicted this kind of consequence. Yet here it is.

For good economies, culture, and just straight peace of mind, vicious uncertainty is not a thing to desire. But that’s what we’re going to get here for all of Europe for some time. Uncertainty. 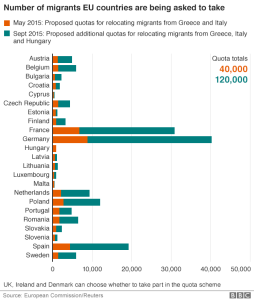 and oh by the way; 120K might only be about 10% of the current number of refugees / migrants; what’s the plan for the rest of them?