One cannot deny Juan Guaidó’s guts, even bravery, at taking the stand he has. I still don’t know how this man is still alive. Any number of deliberate accidents could have occurred by this point, to him or his family. Maduro’s drug trafficking gang regime is not exactly known for its restraint, having already used live rounds against unarmed demonstrators and raping the family members of defector soldiers.

Nevertheless when Guaidó appeared on television yesterday calling for a coup, I had a bad feeling about it all. I felt he was overplaying his hand, reckless, and doomed to fail. Which is exactly what happened. Guaidó seemed to not understand the basic law of coups or war, you need guns and lots of guns. Guaidó had only a few dozen soldiers, who are now hiding in the Brazilian embassy. Leopoldo Lopez, another key opposition figure who broke house arrest to appear in yesterday’s video, went to the Spanish embassy. Guaidó’s whereabouts are unknown.

What did he expect to happen? Well, here’s the insanity of it folks. This was the “plan”:

1) The chief justice of Venezuela’s supreme court Maikel Moreno was supposed to declare “legally” that the Guaidó led legislature was the legitimate arm of the Venezuelan government. This is the point that Guaidó has made all along, that Maduro’s election is fraudulent and thus by the constitution Guaidó is the legitimate acting president.

2) Using this legal decision as his basis the Defense Minister Vladimir Padrino Lopez was then supposed to throw his weight behind the opposition and order the armed forces to shift their support to Guaidó. There are unconfirmed claims that other key regime figures such as the head of the domestic intelligence agency were also in on the plot.

3) It seems the key details of this plan were brokered between Guaidó, the coup plotters, and the US National Security Council. As in, John Bolton himself. We know this because Bolton laid out the plot itself in the last 24 hours, essentially explaining how the coup he engineered had failed. Bolton apparently still seems to think he’s a Fox News contributor and not a functioning government leader who should know when to keep his mouth shut.

4) What this means is the plan was never about soldiers fighting for Guaidó, or street demonstrators overthrowing the regime, but instead focused around what amounts to a palace coup where the main effort, the chances for any success, rested entirely on the personal decisions of hardcore Maduro regime loyalists.

That’s just about the dumbest plan I’ve heard all year. If that’s how this actually played out, then Bolton is an idiot. And Guaidó is either naïve, desperate, or stupid.

a) What would possess them to think that two of the most hardcore of Maduro loyalists in Moreno and Lopez were suddenly going to change hats, when their fortunes, their freedom, and perhaps their very lives depend on Maduro remaining on power?

b) Russia and Cuba have actual armed forces on the ground in Venezuela to support the regime. Their mission is to ensure the regime’s survival. For better or worse, the number of guns Bolton had on the ground is zero.

c) The Venezuelan armed forces and their paramilitary gangs have used live fire against unarmed civilians before. When this was always going to remain the case, and since Guaidó and Bolton essentially had zero guns of their own? So, … ???

Here is singular example of why one should not put their trust in the USA. Regardless of what political party happens to be in power, it’s not a wise bet. America’s enemies are serious. America is not. Bet on evil folks, it’s going to keep winning for a while. 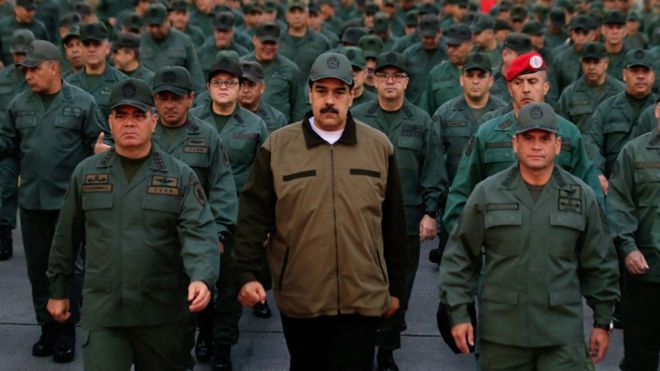