We all want girls everywhere to receive extensive education. The problem is some men (not real men) are in the business of ending girl’s education because they want to live in the year 300. If you’re reading this blog, you probably think this is a bad idea. And so you desire a fair and equitable solution to ensure girls everywhere get what’s their right. Well, here’s your answer:

Shoot them in the head.

Either those men (not real men). Or the girls. Your choice. You have to pick one. Sorry.

Malala Yousafzai was shot in the head by the Pakistani Taliban for the unconscionable crime of promoting literacy. She now tours the world advancing this cause. She’s got more balls than 95% of the male politicians in Pakistan. But unfortunately, what she’s doing barely matters.

There are millions of girls in Pakistan that wake up every day with the reality that their school could end before sundown. Yousafzai is an international star, but the Pakistani Taliban remains. The situation is the same across the border in Afghanistan. A resilient Taliban has among its broad goals a return to their enlightened days where learning how to conduct basic math was an insult to their honor (not real honor).

And in keeping with these delightful themes is Boko Haram. They have an equally emphatic goal to burn down schools and eliminate knowledge. It’s even their name. Like Yousafzai, the abducted girls of Nigeria are now a global cause. Like Yousafzai, nothing substantial is going to come from it.

The various Taliban factions, Boko Haram, and so on, all have one thing in common. They are all lunatics. You can negotiate with them all you want, but they’re not going to change their minds. When a belligerent psychopath produces a moral and physical threat to your values, and is beyond reason, you’re left with two options:

b) Shoot them in the head

For years, the world chose option (a) with regards to Boko Haram. Despite all the noise of the last week, I assure you, the planet is still choosing option (a). Want to save these girls? Don’t login to a computer program unless you’re prepared to advocate for option (b). Want to support Yousafzai’s cause? Lobby for option (b).

You hate the idea of Western “boots on the ground”. You despise war. You are the first to shout at the West when it throws its weight around in the world like a “bully”. You wouldn’t pay $4 a year in extra taxes if it meant funding a UN force in Nigeria. But you’ll get onto Twitter and tweet your support for the girls all day. Sorry, you can’t have it both ways.

If you do not choose option (b), you are accepting that you don’t really care. In this case, don’t bother speaking your mind about “your girls”. You’re just a hypocrite who likes to support causes for a while. Until you don’t care anymore, or move onto the next trendy cause that has your support for exactly twelve calendar days.

1) Push your local representative to get a UN or AU force on the ground in northeastern Nigeria. Then push for them to establish an international offensive force to comb the bush until every Boko Haram zealot is shot in the face.

2) Push your local representative to keep a small Western footprint in Afghanistan. Then push for them to make sure that Western footprint enables the Afghani security forces to comb the mountains until every Taliban is shot in the face.

3) Push your local representative to pressure Pakistan to mount offensives into Yousafzai’s homeland until every Pakistani Taliban is shot in the face.

Or, do nothing. Or, don’t care. Or, login to a social media program and generate a bunch of pointless words or hashtags. Any of these will result in more girls getting abducted or shot in the head. 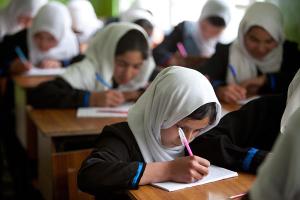 One thought on “Want to keep schoolgirls safe? Shoot them in the head.”