The country is apparently in trouble. Or so the news reminds you about every four seconds. It’s all crisis, all the time. Mostly because it’s good for ratings. But if you ask me, the country will be alright. Only about 0.0004% of us are truly unhinged. The rest of us? We seem to get along pretty well.

On any given day I see members of different races amicably chatting on the train, folks say good morning to one another without any irony at all, people provide money to a local proprietor in exchange for goods and services, parents love their kids, dogs and cats can live together, and so on.

But there are these fringe nuts who are trying to ruin it for the rest of us. With their violent protests and otherwise baffling behavior. What gives?

On one side we have these creatures who are self-professed Nazis. Apparently these idiots didn’t bother to read the memo from their German and Japanese counterparts dated May 8th, 1945 and September 2nd, 1945 respectively. How big of a loser do you have to be in life to choose Nazi is your chosen appellation? Fuck these guys. Even scientologists are more reasonable than these freaks.

On the other side we have the anti-fa, or anti-fascists, or Antifa, who theoretically exist to battle the Nazis off America’s streets. Because nothing says you’re not a Nazi than by engaging in behavior that includes beating up unarmed protestors, breaking the glass of private business, setting fires, and putting reporters in the hospital for filming them doing it. These shits don’t know nothing about history or anything, they should be wearing brown shirts instead of black, they’d fit right in.

If you ask me, all these people can be explained in one simple phrase: They all hate America. They all hate the Constitution and the Bill of Rights. They hate everything that makes us happy and great. It’s in their interests to turn us all against each other. And their political minders are just as accountable. It seems the President and about 2/3 of Congress and other local politicians have determined their selfish electoral futures depend on siding with evil.

But we can’t develop a plan to solve the deep seated corruption within America’s two major political parties. That’s impossible. We’re not the Aztec demon god Itzpapalotltotec. Hell, even Itzpapalotltotec wouldn’t want any part of that. You’d be like, “Itzpapalotltotec, we need to fix the Democrats and Republicans, for you see, …” and before you know it Itzpapalotltotec’s scrambling out the room saying he’s lost his keys and needs to go find them.

But we can develop a plan to solve the Nazis and the Antifa. Because it’s far easier to get idiots to do your work for you. And boy oh boy are these evildoers idiots.

Here’s our plan, bear with us, it’s rather involved:

1) We rent the CBS Studio for The Price is Right. By the way, if you’re young and haven’t seen this show, you should watch it at least once. It’s nice to remember an America where the worst thing that could happen to you in a given day was that a conglomerate would hock their poor quality vacuum to you.

2) We rename the show to Your Side is Right.

3) We invite the top 100 leaders from the Nazis and the Antifa. We do not tell them who the other 100 are. We tell them that whoever wins the Showcase Showdown is allowed to appoint the next Governor of their State and their next Senator to Congress.

4) Once we’ve got all 200 of them inside the Studio, we lock the doors. The American Communist Party and the Tea Party will provide security outside the Studio. Any Nazi or Antifa who tries to escape will be shoved back inside by Commies and Tea Party folks armed with American flags. They’ll use the flag halberds to poke them back inside. We also provide an ample beer supply so the Commies and Tea Party have something to do while the show occurs. Hopefully they all drink it, talk to each other, and learn they all aren’t such bad people after all.

5) Our game show announcer is Clint Eastwood. Because he’s a American icon, bitter, and is still rolling strong at 87. This guy is going to die directing a film on set, which is the most epic Clint Eastwood death ever. We get Eastwood into the Your Side is Right announcer’s booth and he’ll call down the contestants. We place the most expensive bottle of bourbon money can buy in there and our producer will remark to Eastwood as he’s seated, “We don’t care if you drink this.” So we’ll get his guttural voice bringing down each contestant with ballads such as, “It’s Darren, yes Darren Winslow, you’re the next pathetic piece of [beep] Nazi [beep] on Your Side is Right! You [beep] filth [beep].”

6) Our host? Acclaimed actor, cage fighter, wine connoisseur, and amateur bridge player Edward Thomas Hardy. As a limey he’s a neutral third party, doesn’t take shit from anybody, and can beat up any one of the Nazi or Antifa losers while also drunk and bored. We also give him a bottle of bourbon on a small table center stage. Hardy gets the contestants up on stage and the Nazi or Antifa guy thinks he’s going to get a chance to win a car. This is a big deal for the dude as he’s always lived with his parents and bikes to his job at the Sizzler. Hardy does the usual host shtick ala Bob Barker where he chats with the contestant before the potential prize is revealed. In his brutal Cockney accent, with his palm uncomfortably firmly gripping the guy’s shoulder, he’s like, “Well, let me be the first to welcome you to Your Side is Right. [polite applause] Yes, yes very exciting. Tell me guy, [beep] [beep] [beep] [beep] you think [beep] [beep] [beep] [beep] when we [beep] [beep] [beep] [beeeeeeeeep]!”

7) As the game show progresses, instead of being able to bid on a car or hot tub or whatever ultimately worthless material possession we instead treat our Nazi and Antifa friends to a bath of irony. Each one is trolled into their own personal hell. When the Nazi guy is on stage he gets to bid on a handwritten Torah or a trumpet once used by Miles Davis. The Antifa dude gets to bid on Hitler memorabilia or a hand-carved wooden plaque detailing the First Amendment. When they try to storm off stage Hardy grabs each by the back of the neck and pulls them back to the set, reminding them of their goal to win the Showcase Showdown to appoint the Governor and Senator, “Look [beep] blighter, you’re here to WIN right, right?”

8) We make sure Eastwood rigs the cards so that an equal number of Nazis and Antifa reach the stage, the Big Wheel, and ultimately the Showcase Showdown.

9) We do everything possible to antagonize emotions on both sides. We make the room real hot and stuffy, we deliberately deny use of the bathrooms and forbid all water and snacks, cell phone signals are jammed so max focus is on stage. Hardy constantly reminds the audience and the contestants of just exactly where they are and what’s at stake. Such throw away comments emerge from his mouth after he sips from his bourbon:

“Well I know who’s going to get to [beep] determine the future of this country.”

“One of you all owns the streets. Not sure whom. But I’d sure love to [beep] find out.”

“I love a good show. Don’t all you [beep] love one too? But to me, the greatest show of all, is who gets to rewrite history. You [beep].”

10) By the time the Showcase Showdown occurs we’ll have the place seething with rage and hate. There will literally be condensation of darkness dripping down the walls. Everybody’s exhausted and shouting. As the Showcase Showdown product displays play out, and all of sudden Hardy’s gone. He’s not there on stage anymore. Eastwood’s gone too. These 200 freaks are all alone.

11) Did we mention that upon entry we did not make use of the metal detectors? Whatever these 200 people were carrying when they walked in, they’re still carrying. Eastwood’s voice comes out through the speakers in a recorded announcement, “The winner of the Showcase Showdown and the chance to appoint the Governor and Senator is the last one out the door. Have fun. [beep]”

12) Several hours (or days, either way works for us) later only one man will leave the Studio. The Communists and Tea Party will be dismissed. The Studio will be burned to the ground. Eastwood and Hardy will escort our winner into a nondescript black van. He will never been seen again. America will thus be improved.

13) We need your support! We need money to make this idea happen. Tom Hardy doesn’t work for free. We have to pay CBS for the Studio. The Nazis and Antifa need paid travel expenses because most of them are unemployed. Etc.

Please kindly submit your donation to:

The Arcturus Project – Your Side is Right

Your cooperation, as always, is greatly appreciated. Only via your financial help can we improve America. Either that, or you can hold the door open for a total stranger sometime today, and smile at them. Either way. 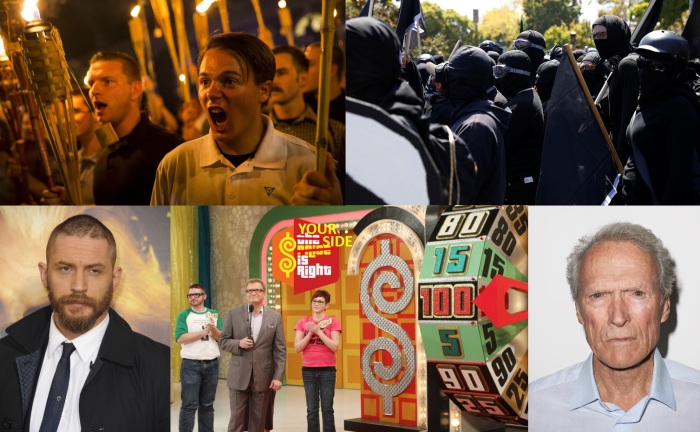