Let’s get something straight.  If Russia functions correctly, nobody shoots the senior opposition leader four times in the back just steps from the Kremlin without Vlad’s go ahead.  So it seems easy to say that Vlad did this.

On the other hand, how reckless and stupid of a dictator must you be to order the senior opposition leader shot four times in the back just steps from the Kremlin?  So like, Vlad’s rather reckless and stupid, it’s his thing, so he probably did it.

But Vlad’s also a genius, and so he probably isn’t this stupid.  And so maybe Boris Nemtsov got himself into some unrelated trouble or, uh, [furrows brow].

And thus we see clearly one of the greatest weapons Vlad wields.  Nobody really knows what the fuck is going on.  Did he order a blatant, vicious murder in the open streets six steps from his own bedside or didn’t he?  Who the fuck knows?

This Churchill guy, he was rather smart, and so his multi-dog struggle under a carpet quote is quite correct.  You never really know what’s going on in Russia.

Except, unfortunately I think I know what’s going to happen, even if I don’t know what’s going on.  I rather think this doesn’t change anything.  Even if 100K people are marching in Moscow today, I think Vlad’s approval rating is still north of 70%.  So at least Russia’s got that going for it. 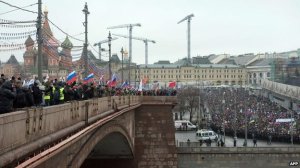 take a very close look at this picture, and all the construction cranes building new things; as long as that keeps happening, most Russians will probably let him get away with murder