I want to see raw mayhem. Where’s the burning cities? The millions of refugees streaming down a road, masks of suffering and terror, from one end of the horizon to the other? Where’s the expenditure of millions of rounds of steel followed by retreat followed by mass executions? Somewhere in Valhalla there’s two drunken Nazi and Red Army officers arm-in-arm screaming, “That’s not how you do it, pig!”

All ambiguity’s gone now. There’s no doubt. Russia’s invaded Ukraine. You could make excuses earlier, whatever you found most convenient: The rebellion started in Donetsk with ethnic Russians, but they’re Ukrainian citizens so it’s not an invasion; Russia only provided equipment, or volunteers to fight, not the actual army; and so on.

Well, the excuses are over now. Thousands of rebels armed with heavy equipment didn’t just magically appear more than fifty miles from the Donetsk front. They came across the border and I’ll bet my dog’s favorite toy that every single one of them is regular Russian army.

Russian invasion of Ukraine circa 1944

It has to really suck being history’s invasion doormat. Just ask your Middle East or Balkans neighbor. Ukraine’s had the joy of getting run over by Scythians, Persians, Greeks, Romans, Goths, Mongols, Turks, Russians, Nazis, Russians again, and now Russians again.

But by the standards of any of the aforementioned dance parties, this invasion is positively lightweight. Vlad’s not looking to sack Kiev for the twelfth time.  So what’s he up to? Well, that’s the strange part.

You know, trying to determine what Vlad’s going to do next is probably just about the most interesting and frustrating thing you can do. He keeps you guessing. It’s one of the things that allows him to run circles around his weaker, indecisive Euro-trash counterparts.

But honestly, I think most of the time Vlad doesn’t know what he’s going to do either. And not just because he’s totally insane, although that’s certainly the case. I think he’s a master of the wait-and-see approach to all of life’s challenges. He takes a major step, evaluates how his enemies respond, and then determines what his next move is.

Western leaders used to be very good at this strategy too, remember Bismarck, Roosevelt, or De Gaulle. But the West’s leaders are now willingly enslaved by this afternoon’s three second sound bite and next Tuesday’s polls. So this kind of deep thinking is beyond their meager brains. Please remember kids, Western politics is a “game played by smart people”. Smart being defined as never thinking more than twelve seconds into the future, unless it’s about the next election. Either way, Vlad doesn’t have that problem.

So what’s Vlad likely to do? Probably for the first time since this all began, I think it completely depends on what Europe does. Because Vlad no longer seems to care what Ukraine does. He’s confident he can manage Ukraine alone.

He launched this invasion while he was in Belarus talking “peace” face-to-face with Poroshenko. It wouldn’t surprise me if a few minutes into these talks Vlad had sipped his vodka, shrugged, and blurted out, “Oh, Petro, by the way, I’m taking Novoazovsk as we speak. You’re fucked. Want a drink?”

Vlad the Unmerciful, Catherine Ashton (the decent but powerless hack of Europe), Lukashenko (Overload & Dictator of All Belarus), and Poroshenko (current holder of the second hardest job on the planet after bear baiter.

Ukraine can beat the rebels given time, but Vlad won’t allow that to happen. He’ll let them get just close enough to victory to ensure the rebels can’t completely ruin his idea of peace. But he won’t let Ukraine achieve total victory. He can’t allow them to do that for a whole slew of reasons we’ve previously discussed in other posts.

So he’ll keep messing with Ukraine until Poroshenko gives in and cuts some kind of one-on-one deal with Vlad. On terms that broadly favor Russia. I think the whole Belarus meeting, plus the simultaneous invasion, was meant to beat Petro over the head with this reality. This invasion is meant to bring about that end state.

But, no seriously but, Vlad’s also going to wait and see what Europe does. Don’t be surprised when if Europe mostly does nothing, that Vlad might try and keep the army advancing until Russia controls Novoazovsk, Mariupol, and ultimately creates a Russian land link all the way to Crimea.

If Vlad can get away with that, why wouldn’t he do it? As far as victories go, he’d be hailed in Russia as Peter the Great’s militant ghost. Because, hell, nothing can better distract Russia’s citizens from the reality that they’re living in an open sewer, fueled by Vlad, than one of Vlad’s immortal victories.

Will Europe allow it? Honestly, I have no idea. I’m not optimistic. But on the other hand, Europe’s been talking tough lately. Maybe they’ll pass another round of sanctions fierce enough to scare Vlad off. Or maybe they’ll do nothing because they’ll realize that winter’s coming and Vlad still has his hands on the gas pipeline valve. We’ll see.

But no matter what happens, even though this crisis has been shit to the goodness of humanity from the start? We should still take comfort that this invasion is boring. We’re still playing the same old silly games, but the overall body count is 0.0001% of what it once was. So at least there’s that. It’s not much, but we should take it.

Still, here’s hoping the Ukrainian army keeps doing its thing. Here’s hoping Europe steps up and proves they’re still alive. And here’s hoping one of Vlad’s belligerent mistresses cracks a bottle over his head on Saturday night. So that he’ll get mixed up inside his brain and make a cruelly dumb decision. Like ordering the army to invade Mongolia. Because why not? 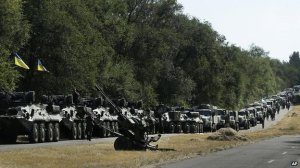 To understand how far they’ve come, I submit the discipline of this convoy would have been beyond the Ukrainian army even two months ago, let’s hope it’s enough