We’re problem solvers here. We help people with problems. Which is unwise. Because we a lot of problems. I can’t get through a cup of coffee without getting bashed with a problem.

Like what do you do when you wake up and find one of your dogs has vomited on the carpet, but you can’t figure out which one did it to check to see if they’re okay?

Or how do you respond when sunrise hasn’t occurred but one of your guests has already threatened another guest with fatal bodily harm?

Well, typically I just shrug and resign myself to the faceless existence that is all our lives. Then go to work. Sweet.

Anyways, so we’re going to take all that in context and then help all of humanity with a problem. It’s what we do. Even though we shouldn’t. No really, we shouldn’t.

There’s been a lot of news articles lately about a topic people don’t care about: all that space junk that’s floating around in Earth’s low and high orbits.

What’s that you say? You don’t care? I know. But you should care. Because everything you use during your day somehow depends on said junk not ruining everything.

Soon, if it’s already not in progress somewhere, you’re not going to be able to brush your teeth without establishing a firm satellite connection that notes your location, plaque removal status, and overall dental health intent.

This information will get reported to a government agency for evaluation to establish you’re within set standards. Do you find such a wired future unappealing? Your recourse is to flee to the mountains & unplug. Or obey. Either way.

But at the very least if you currently use some form of GPS or television or like to know the weather, you’d better hope we figure out space debris. Because sooner or later it’s going to get out of control and then we’re really going to have a problem. Because satellites will blow up ten days after they’re emplaced.

And I’m not talking about that stupid movie Gravity. I never saw that piece of trash. I saw enough to know I hated it after the very first teaser. Mostly because I find the idea of putting both George Clooney and Sandra Bullock on screen mentally repulsive. It’s like paying the most machine engineered Hollywood leading man and woman and getting them to shove their hands inside your wallet while you’re in the shower. I can’t stand either of them, on or off screen.

Plus, I’m sick of movies that masquerade as theme park rides. Inside folks’ brains, they’re like: Wow! Look at how much debris was in that movie! All the action and ‘splosions! It’s like you’re floating in space! I love that, I’m floating! In space! I’m floating with George Clooney! This is so awesome!

No, no idiot, you’re not floating with George Clooney and Sandra Bullock. They don’t even know who you are. They have so much money they use $100 bills to clean their dogs’ vomit off the carpet. Now you just gave them more money. Why? Uh, [shakes head] the very thought of all that induces me to start loading a revolver.

Anyways, so humanity’s got to solve space debris. So there’s been some wacky solutions proposed in the news lately. Here are some examples:

– Send a robot up there to capture or push debris into the atmosphere to burn up. [we think this is most legit]

– Use a death ray from ground or space to zap debris. [cool]

– Send a big magnetic bar up there to attract metal and vacuum up the stuff. [really?]

– Ignore the problem. [we think this is most likely]

I’m advised by the most belligerent minds this side of the Crab Nebula. So you know my ideas are golden.

When my guests first got here, they told me we had so much garbage in orbit it look like somebody vomited atop our world. It’s embarrassing. Time to get it fixed.

Currently, nuclear weapons are decommissioned via a complicated, expensive, and dangerous disposal process. Forget that. Instead, we shoot all those nukes into orbit and blow up substantial portions of space to remove debris. Then, we build more nukes and fire them up there too. We clean out the orbits in a sea of fire and armageddon. It’d be like a fireworks display for the whole planet. What’s not to like?

What’s that you say? This idea is horrific? It won’t work? I’ll add more debris or electromagnetic pulse the planet to the dark ages?

No, that kind of short sighted risk adverse thinking is what got us here in the first place. It’s time for action! [throws chair] We’re doing nothing to fix the problem. Time to let me try and recklessly fix it. Even if all I do is make it worse.

Space debris will have a real hard time ruining our lives when there’s not an Earth left for it to harass!

Hey, those assholes started it! It’s time for some payback.

What’s that you say? This has nothing to do with the problem at hand?
Who cares! We’re going to blow up freaking Mars! How awesome is that.

4) Return to the Stone Age

Without technology, we’ll not need anything functional in orbit. Everybody loves these apocalyptic disaster and/or zombie stories right? We can make it happen. Right now!

Please start by robbing your neighbor’s fridge for provisions. You go first! We’ll watch and then follow you right afterwards.

For a small nominal fee, several specific routine gifts, and the opportunity to become Overlord of All Humanity my guests will design, build, and operate a craft or weapon capable of clearing all non-functional debris from orbit. They say it’s an offer we can’t refuse.

No really, they say we can’t refuse. So seriously, we’ve got to do something. Quick. They’re not joking. They even let me write this post so you’d know they’re serious. But what they don’t understand is that nobody reads this blog. So their threats are futile. And I’m in a heap of future beatings once they find out. I tried to take all the phone books out of the house. And then they went and bought more. Where/how do you buy a freaking phone book!? 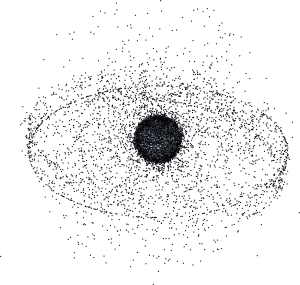