We live in an age of perceived extremes. Everything is life and death. Did you vote for the guy somebody else didn’t, then you deserve torture. If you disagree with an opinion, you’re not misguided, you’re in league with Satan. If you want to go a route the other gal doesn’t, you must want to steal her soul. And so it goes with every single issue according to our enlightened media (not actual journalists) and their business & political masters.

Today’s needlessly over-the-top main event is whether a bunch of college kids decide to form a union. Apparently, if Northwestern’s football team votes to join, every college athlete will instantaneously fail every class, and every university sports program will go bankrupt before sunset. If they vote against a union, slavery will be reborn before sunrise. Even the junior varsity girl’s lacrosse teams will be trudging around in handcuffs.

Hey! Folks, calm down. It’s just a bunch of people arguing over fucking money! There’s an old married couple doing that right now over coffee. It’s not that big of a deal! Let’s at least talk about it in a reasonable manner.

Now I could offer my thoughts on this issue for about four hours, and maybe I will later, but essentially I am drawn to the view that the players are right without question. The second most popular sport in America is college football. That’s a lot of cash and the athletes don’t even get one dollar. Yes, scholarships, I get it, but we’re talking billions here. They can’t even give them a small stipend? Come on guys, it’s not that hard to solve, just give them something. Figure it out.

So some Northwestern players have decided that the solution to their clearly inequitable situation is to form a union. Is that the answer? Probably not. This is not the kind of problem you truly solve except through negotiation. Everybody wants to rely on the courts, or wholesale actions like this union thing. Again, it’s all about extremes. Don’t talk with your opposition, crush them, total victory is your goal. Negotiation is for weak, limp-wristed losers.

The problem with this viewpoint is most people’s brains don’t work that way. Humans are naturally inclined to take the less controversial route. We avoid conflict where possible. We generally don’t like to argue with our neighbors. We hate to take a huge risk just because somebody demands that we be angry. And so, what’s probably going to happen today is the Northwestern players are going to turn down the union.

Now the union types will point the finger at the university and the NCAA. That they soiled the minds of the players to the point that they had no choice but to vote against it. That this is part of an effort to keep the athletes in check, any way they can. First off, this will show the shocking (not shocking) contempt that the union supporters have for the ability of a college athlete to decide things for himself, and vote accordingly.

But I also want to say to them, well, certainly union guys, what did you expect the NCAA to do? You went for the jugular of the universities on this. Did you think they’d lie down and do nothing? When you don’t compromise, don’t whine when the institution you oppose chooses to fight back.

This kind of belligerent rhetoric has become a more common theme lately, or again, whatever. And consequently, why would anybody join a new union? Now generally, I try to avoid brutally criticizing some things (lie). I’ve never been in a union, and I can’t really say I’ve known too many who have. Of those who I know that have, some hate them, others love them. But I do know that for the most part they’re declining in overall membership. Why? I think a lot of it is because of what I’ve discussed earlier in this post, the tendency toward the extreme.

Unions have made the Northwestern issue about unions, when it clearly isn’t. It’s about the players and whether they are properly compensated for the risks they take with their bodies. The union backers will tell you it’s one in the same, that the potential union and the player’s futures are intricately tied. They’re wrong. A union is just one potential answer to the player’s problem. It is not the one, final solution.

When all the union dudes show up and hammer the way they do, I think it really turns people off. When you tell a twenty year old college football player that if he doesn’t sign up for the union that he’ll continue to be a slave, I think you’ve achieved the exact opposite of your intention. He’ll look around, and roughly determine that things aren’t like that from where he sits. He’ll trust his coach and his university before he trusts the screaming, bizarre asshole demanding he join. I think he’d say something like this:

“Hey, you know what, I should get paid for what I do. But generally my deal isn’t all that bad, and I really trust my coach and kind of like my school. I want to get paid, but man, this union guy really sounds like a psychopath. I think I’ll stick with what I’ve got for now. There’s got to be another way.”

As another example, observe yesterday’s comments from Post Office union officials regarding the move to transition some functions to Staples. Based on what the union leaders said, you’d think that if this actually occurred, that the following things would happen:

1) Staples will steal your mail

2) All post offices will combust in flames, with kittens trapped inside

3) All postal employees will become unemployed and starving, their kids too

4) Staples will sell your mail to Hitler’s ghost, and use the proceeds to purchase narcotics

When you always reach for the fanatical, and brand those who oppose you as equivalent to religious enemies, after a while don’t be surprised when people tend to treat you like a cult. People don’t like cults. People don’t like extremes. People generally want to be talked to like they’re intelligent adults.

Personally, I’d be a lot more persuaded by a logical, coherent argument about why it’s a bad thing that somebody at Staples handles my mail. But it seems even the highest, most experienced Post Office union leader is incapable of doing anything but screaming on the street.

If the Northwestern players vote against the union today, you’ll hear the union supporters demonize everybody but themselves. Sometimes, the best thing you can do upon a defeat is look in the mirror. 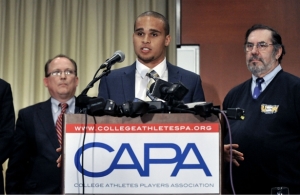 One decent young man trying to do the right thing; surrounded by two cult members

One thought on “When you consistently act like a cult, don’t be surprised when folks don’t join”