Think the laws are asinine?  That they appear as if written by elves popped up on meth?  It’s all true, except that meth elves would write better legislation than your average politician.  Especially because meth elves can’t be bought off with campaign cash, special favors, or drugs.  Except if those drugs are meth, in which case you could get the meth elves to vote for legalized schoolchildren abduction.

Try this detailed & thorough legislative process on for size, friends:

So folks have distilled whiskey in Tennessee for a long time.  Now, for whatever reason (there is no legitimate reason by the way), a bunch of politicians have decided they are going to tell humanity what is and is not whiskey.  Did you hear that?  A guy who can’t remember where his car keys are until his sycophantic aide reminds him is going to tell a master distiller how to run his business.

Then two extremely large and rich multinational corporations are going to get involved too.  Their purpose is to lobby (buy) the votes necessary to craft the legislation that is most beneficial to their interests.

Guess who gets lost in all of this?  You.  You’re too stupid to look at a label and buy the whiskey you think is best at an honest and reasonable price.  Politicians and big business are going to tell you what is whiskey, how much you should pay for it, the meaning of life, and whether or not you should have broken up with that girl thirty years ago.  Don’t ask questions, don’t think, just keep shoveling your hard earned cash at them please, they’re busy and important men.  They don’t have time to care what you think.

I’ve been churning a lot lately on why most folks now hate capitalism when the alternatives have such an awesome track record.  I think I’ve hit on it.  People don’t hate capitalism.  They hate crony capitalism.  And they really, really despise that the game is rigged.  They want an honest playing field for all.  They don’t want elite political and corporate leaches ruining it for the rest of us because the leaches want a new boat.  Now you’re going to tell me that’s because capitalism, crony capitalism, and a rigged game go hand-in-hand.  So it’s all the same thing right?

I disagree.  They’ve been making whiskey for two hundred plus years in Tennessee without this law.  Seeing as how I’ve sat across the table and toasted Tennessee whiskey with Japanese, Russians (they’re not all Vlad loving fuckers), tart Brits, and Koreans with Tennessee whiskey in the glass, I can assure you their use of capitalism is working just fine.  But now, we’ll go ahead and add crony capitalism and vote buying to the distiller’s mix.  Awesome, way to ruin a great thing, assholes.  It’ll make a lot of politicians and corporations very rich.  You’ll lose out, and so will the small business distillers, but nobody cares about that.

So remember, next time you think the laws are screwed up, or that capitalism is unfair?  Call your local politician.  Don’t tell the first goon on the line you’re there to complain.  First tell them that you represent Proctor & Gamble and wish to contribute $500K to the next campaign.  Then, when the real person is on the line, let ‘em have it with both barrels, frontier Tennessee style! 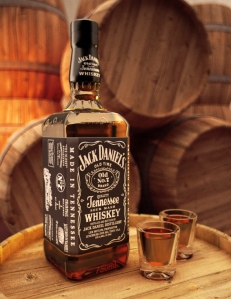 Suddenly, I taste a lot worse when I’m endorsed by the state.