And you stare down at the box containing (an ultimately mediocre) breakfast bars and they have this little nugget on the box: 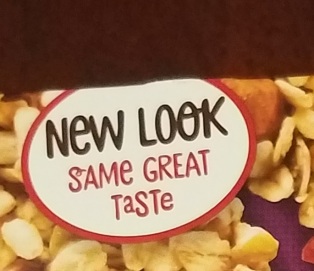 What exactly is the point of this?  Who on the planet could possibly care about the look of the box?  Even the text of this graphic is all squiggly and happy.  Like I’m supposed to assume the emotional core of a blissful meth elf because they updated the design of this box?

Does this sort of thing actually, really work on people?  It must, because it happens a lot.  Advertising goons do this all the time.  They throw out words in some desperate attempt to engage your brain.  For example, when they change the names of companies for no reason at all.

When The Onion isn’t busy shaming itself by getting in on the already overly tedious and incessant bash Trump wagon they put out some pretty darn hilarious stuff.  Years ago they put out something similar to this nonsense post when they wrote about “Under New Management” with this one.

The only solution to this problem is to eliminate most words.  In order to put a word on a box of cereal bars, the advertising goons have to submit themselves to a trial by ordeal with a drunk thug from Valhalla.  The price goes up by each word used.

For example, if the ad executive uses the term “Great Taste” it’s 30 seconds in the ring with the thug.  Why is the thug drunk first thing in the morning?  It’s what he does.

Thus, “New Look – Same Great Taste” equals about one minute and 15 seconds of action with the thug.  Given that these folks are all losers (they work in advertising) I’m guessing they’d defer the thug battle.

And the rest of us would have less words to deal with in the daily course of our lives.  It’s win / win!

Please hold your applause at the display of brilliance contained within this post.  [claps hands in an empty room]