If you travel a ton, eventually getting on an airplane can just seem like an extension of your commute.  Unfortunately I’m on travel almost entirely for work vice fun, but it’s still the same feeling.  You get up at home, go to work, head to the airport, end up somewhere else, and conclude your day in some hotel.  It can become downright routine, and you have to do a double take inside your brain, oh, I’m in Chicago again, got it.  [looks outside hotel window to verify location is real]

The problem with this theory is that it can get short circuited.  When your commute home via road or train goes wrong it’s typically not catastrophic.  When things go wrong with the airlines it can be like getting hit with a brick.  Ancient Greek Anemoi wind gods can get angry I guess, because being deities they can’t consume beer like we can, so it’s easy to see why they get pissed off.

I usually get to book my own flights even for work.  So I generally go with Southwest due to price and service.  But this last trip work booked my flight to Chicago themselves, and went with, sigh, American Airlines.  Knowing the issues I’ve had with American in the past, I figured this was going to be a bad journey.  I had no idea.  It turns out when I woke up that morning American Airlines was under my bed armed with a pole axe, three cartons of cigarettes, and plastic bag full of rusted metal.

I wonder if it was ever, in any way, really like this?

– Half-hour flight delay before I’d even left work.  90 minute delay by the time I got to the airport.  Why have scheduled departure times?  [shrugs]

– My typical departure airport is not an American hub, so they only owned four gates.  Of those four gates, two of their aircraft broke down after they’d boarded the flights.  So they disembarked both planes and tried to reconfigure these passengers onto the other two flights, one of which was mine bound for Chicago.  But then they only had one poor gate agent trying to deal with all these passengers and the line stretched down the entire terminal.  Later we learned one of the broken aircraft was grounded because multiple structure screws were missing from the fuselage.  I literally laughed out loud, because it means the captain missed this on his shitty preflight walkthrough and was ready to fly an unstable aircraft.  I wonder what baggage or fuel employee making minimum wage noticed the error and kept everybody out of danger?  I’m sure he’ll get a letter of appreciation or something, if anything at all.

– Eventually after a two hour delay they boarded my flight and of course packed it up.  But Chicago had thunderstorms so they had to hold us on the tarmac for a half-hour before putting us back in line.  The woman behind me began to complain.  Then she got belligerent.  Apparently she’d earlier been on one of the planes that broke, and didn’t want to wait on the tarmac with her two year old.  Eventually she started to scream at the flight attendant and demanded the plane return to the gate.  This went on for ten minutes before the attendant threatened to have her arrested.  And they went back and forth for another five minutes or so.  The woman’s boyfriend and supposed father of her child kept egging her on, telling her to go back and talk to the attendant some more.  She tried to get past the flight attendant to try and bang on the cockpit door, and the attendant said she’d call 911.  So the woman laughed and went back to her seat and dialed 911 herself.  She then spent about fifteen minutes on the phone demanding the police order the airplane back to the gate because she didn’t want to fly today anymore and because “the plane is going to crash and all of us are going to die”.  Then she starts bawling uncontrollably to the 911 operator.  All the while, her two year old is crying too.  Her boyfriend is just sitting there playing with his smartphone like this is an everyday occurrence.  I hated him most of all.

–  After a half-hour of this the captain finally intervenes, but only to use a limp wristed passive aggressive voice over the intercom that passengers should be nice to the flight attendant and he was driving us back to the gate.  If I was that flight attendant, I’d have been pissed that my boss would basically refuse to back me in such a matter.  We got back to the gate but they’d returned us to a gate not configured to receive our aircraft model.  So we sat at the gate for another half-hour while they got the jetway part.  Then the air conditioner broke.  And the woman continued to scream at the flight attendant.  The captain never came out of the cockpit.  Inexplicably, this woman or her boyfriend were not arrested.  They simply let them and the rest of us get off.  Then they just cancelled the flight without explanation and told us all to go get our bags from baggage claim.

– We all spent the next two hours at baggage claim waiting while American tried to figure out how to conduct a task they normally perform dozens of times a day.  They first unloaded our bags and then put them on a flight to Charlotte, for whatever reason.  Then they took the bags back off the Charlotte flight and put them on baggage trucks where they apparently forgot about them for an hour or so.  Then they closed the airport tarmac due to lightning.  Then they claimed the baggage handlers were working on it when they weren’t.  So the baggage agent ends up having to go find them and it turns out the baggage guys were on the smoke deck, burning one, because why not.  Eventually the baggage agent is screaming at her manager on the phone for help.  The manager never showed up.  And eventually, somehow, the bags showed up.

– Then American told us all get on the road and drive to my city’s other major airport.  I called work and they told me to oblige.  So we all drove 45 minutes in our cars to the other airport and began to check in again.  By this point I knew half this plane’s people.  It was a decent cross section of America’s melting pot, mostly good people, we got through it by laughing and joking with each other.  By some thankful miracle, crazy lady and her boyfriend never made it to the other airport.  By the time we got to the other airport this was a 15 hour ordeal.

– The departure from the other airport went smoothly, but when we got to O’Hare they didn’t have a gate for us.  So they randomly drove the airplane around O’Hare’s tarmac for over an hour while American tried to find a gate.  When we did find a gate, we sat at it for an additional half-hour, because why not.  By the time I got to Chicago work, I’d been on travel for 21 hours.  I felt like I’d just come out of dry cleaning machine.  Thanks American Airlines, you’re swell.

Frank endorses TWA, an airline absorbed and destroyed by American by 2003.  I wonder if it was ever, in any way, really like this?

Post Scripture:  People can be such jerks.  Beyond the antics of the crazy woman described above, dozens of other people took it upon themselves to harass or yell at flight attendants, gate agents, baggage agents, or even uninvolved random airport employees who did not work for American.  Attention Humanity!  Expressing your anger in a barbaric manner to a low level airline employee who likely makes far, far less money than you accomplishes less than nothing.  It’s positively deplorable.  They are not the source of your pain.  Instead, spend your hate on folks like American’s Operations dude Robert Isom or CEO Doug Parker who simultaneously can’t do their jobs while also making about 700 times the cash each year you do.  But hey, they each just bought that third boat, so they’re full of win.  We are not, but whatever. 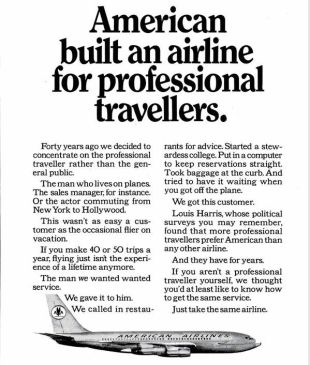 When you read this old ad in detail, you can start to get the idea of where American went wrong, decades ago.