Someday somebody way smarter than me is going to write a book where Detroit is a metaphor for all of America. You can trace the tale from the earliest French settlers, to British rule, frontier America, transition from an agrarian to industrialized economy, full blown dominance (Detroit probably single handedly out produced Nazi Germany), followed by collapse & depopulation, followed, by what?

Well, one would hope rebirth. Rather than continued slow decline. Since 1950 Detroit has lost almost 2/3 of its people. A similar trend stalks Cleveland, Milwaukee, and countless other Midwestern cities. Literally, Detroit used to be the center of the world alongside New York and London. Will it ever return to its former glory? Is it even possible? I’m not sure. So much of what drove this greatness no longer exists. What America is and does is so very different than in 1950.

Maybe I’ll try and write about it later on. But for now I’ll let the photos speak for themselves. Or at least to also offer that Detroit has some of the worst traffic I’ve ever experienced, which says a lot considering the parking lots I’ve driven in (Tokyo, Washington, New York, LA, etc). And also Detroit’s suburbs have some of the best Lebanese food on the planet, truly legit awesome stuff.

Work sent me to Detroit for all of three days. I only ended up snaking a few hours to drive around. Sadly I didn’t get to do anything reasonably fun. So I guess that means I’ll have to go on back on my own dime.

One Woodward Avenue (left) and the Guardian Building – One Woodward was completed in 1962, note its applicable stale awfulness.  Guardian Building dates to 1929 and is apparently beautiful inside.   Also note the weirdo sky bridge which linked the two since the 1970s.  In 2012, Rock Ventures LLC bought One Woodward.  Rock Ventures owns Quicken Loans, a bunch of sports teams and casinos, and about a 100 other companies.  I suppose it’s an example of the types of companies that Detroit has to attract in order to rebuild.

Ambassador Bridge & Downtown Detroit – The busiest border crossing in North America, the bridge carries 1/4 of all trade between America and Canada.  The separate Detroit River Tunnel carries rail traffic.  In a bit of weirdness the bridge is actually privately owned by a guy who appears to behave like an evil monopoly man cartoon caricature.  A second bridge is scheduled for completion by 2020. 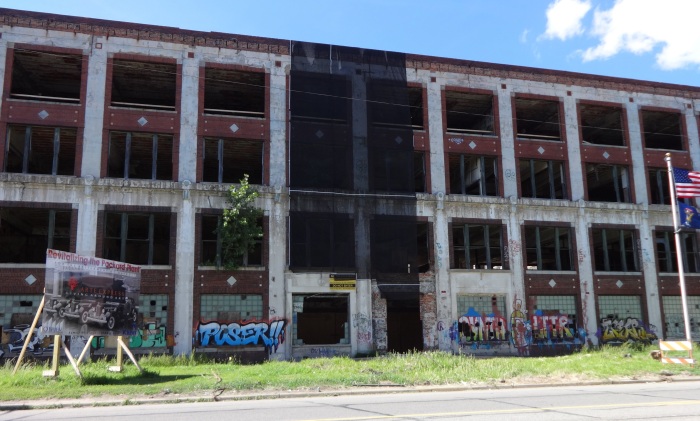 Ruins of the Packard Automotive Plant – Completed in 1911, it built cars until 1958.  By 1966 Packard had evaporated as a car company.

The next three shots are of ruined houses just a few blocks away from the Packard Plant.  Once upon a time, an American farm worker could move to Detroit and get an entry job at the Packard Plant.  Thirty years later he could retire as a supervisor with a decent pension, and go buy himself one of these beautiful houses to live out his days as a grandfather.  Now it’s all gone, the Plant, the house, and this very concept of employment as part of the American Dream.  I wonder if they could have ever imagined how bad it would get?  Understanding why this all came about, and where to go from here, is central to Detroit’s future.  And perhaps America’s as well. 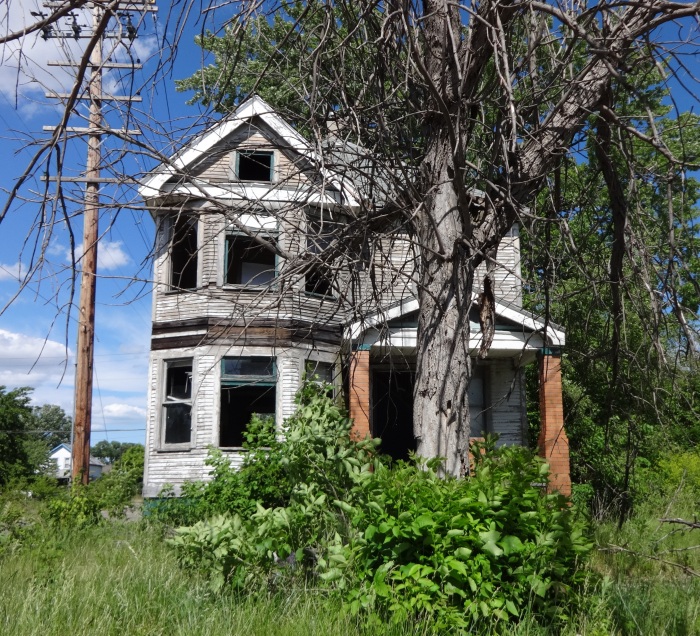