Dude should have brought more than just a knife before digging up a Nazi tunnel.

The possible existence of said train is called local folklore or whatever. Meaning it might not have ever actually existed, but folks said it did. Or it became a rumor, a legend, worthy of exploration. Indiana Jones 5 needs this plot. Apparently Harrison Ford is going down this road again even though he’s now 89 years old. The fourth Indy movie is perhaps the worst thing I’ve ever seen. So Indy needs to get back to his non-awful-alien-movie roots. Who doesn’t hate Nazis? Indy sure does, he told us. The movie can still take place in the 1960’s, it just has to involve the gold train, Nazis, and somebody other than Ford to do all the punching. 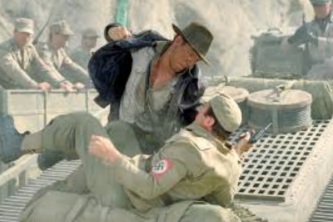 Remember when Harrison Ford / movies were this cool?

Hey speaking of hating Nazis, the latest games I’ve been playing are the two recent ones from Bethesda: Wolfenstein The New Order & The Old Blood. After being stuck in a bit of a rut playing games that ended up as shit, or had garbage endings, or got trapped in Open World Hell, I find these two games to be rather delightful and refreshing:

2) A Clear Plot – you fight to stop the evil Nazis

4) A Decent Ending – bask in the glory of a video game that doesn’t have an ending bathed in weirdness, nihilism, total nonsense, or an attempt by the designers to appear smarter than you

So I’m calling it right now, the next Wolfenstein game needs this plot too. They find a Nazi gold train. Wind up plot. Go.

We know Indy, we hate Nazis too.  So we follow your holy example.