Dark days are ahead for China. There be monsters north of the wall. Winter’s probably already here, or something like that. Everybody’s scared, the army’s not ready, disaster looms. But don’t worry, Matt Damon will show up to save everybody. 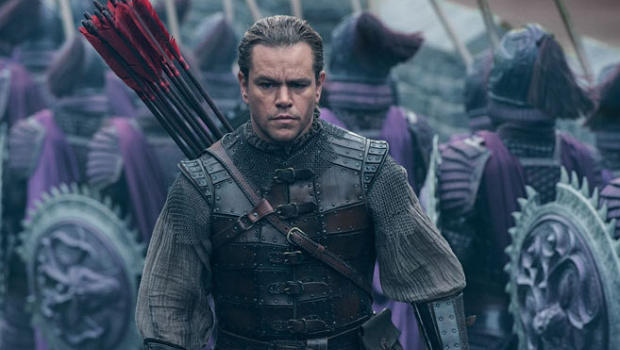 Remember when this guy wasn’t an action movie star?

Except it’s a big trick. For the monster is not some type of mythical creature that eats life. Instead, it’s the devil incarnate of bad action movies. This hideous demon spawn was born from an unhuman blending of the reproductive organs of Michael Bay’s Transformers and Zach Snyder’s Superman. China doesn’t stand a chance, even with Damon’s purchased-sculpted-boxer-physique. 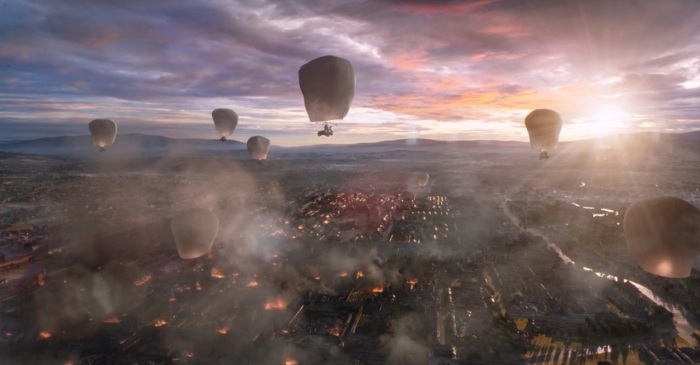 The Great Wall is China’s most expensive movie production ever. It cost $160M in pure gold pressed latinum and is a massive gamble by both Hollywood and the Chinese film industry. Legendary Entertainment does the production as the now full-fledged member of China’s business community since they (sold out to) were bought out by Wanda Group.

Bankrolled by Wanda Group’s overlord, Asia’s richest man, and expert 1930’s style tap dancer Wang Jianlin, this flick’s meant to serve as a key mark on what Wang and many, many Hollywood suits hope will be a very long and lucrative alliance. If it’s not already, China will soon be the world’s largest film market. And you’d better believe Hollywood wants in on all that luscious cash.

This forthcoming epic masterpiece will hit theaters in China this December followed by a February 2017 debut in the States. This is a bit strange, as February is usually second only to January as a dumping ground for garbage films. Maybe they’re hoping a sparse market will help the film perform better? Maybe they’re hoping they can rope in the Valentine’s Day audience as 11th Century Chinese warriors are viciously beheaded by evil monsters? 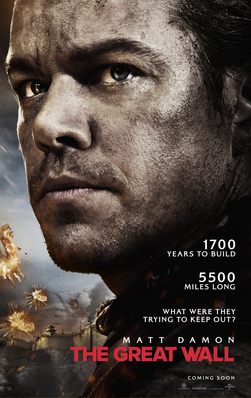 Eh, I’m pretty sure The Mongols. Why do I need to pay $13 to see a movie when I already know the answer to the poster’s wise quest question?

Anyways, in our current modern media culture, we can’t have anything without a race based controversy. And boy does The Great Wall sure have one in the entirely accurate accusation that they whitewashed the cast by adding Damon when an otherwise all Chinese cast would have made a lot more sense.

They claim Damon plays a mercenary or something. Maybe he’s there to assassinate Jason Bourne? It would have to be something specific like that. Because from what I know about the Song Dynasty, I’m pretty sure the Chinese army didn’t lack for limitless raw manpower. So there’s nothing that would require them to hire to creepy white guy from Medieval France who’s on the lam for stealing Her Ladyship’s already stolen virtue.

Whatever. This aspect of the flick doesn’t really interest me. Damon’s presence is really rather simple. Wang and his minions want to make cash worldwide. In order to do that you need a global star. Damon is a global star. There’s not a single Chinese actor that comes even close to his worldwide appeal. That’s why he’s there. There isn’t much else to it. Money!

Except to perhaps ask the question: Why isn’t there a Chinese actor as world famous as Damon? Ah, yes, now we get to the parts I actually care about. First off, let’s take a look at the director in the brilliant Zhang Yimou. I really like Zhang, the dude’s made some incredible movies and knows his craft well. In particular, To Live and Hero are quality movies. To Live even approaches the realm of masterpiece in my mind. But that was then and this is now.

Then, Zhang got himself banned from filmmaking by the Communist goons because To Live did such a great job tearing down the hypocrisy of said dictatorial state. Now, Zhang is their errand boy. So he thus produces flicks of questionable messaging and quality such as The Flowers of War, which also had a conspicuous hunk-white-dude lead in Christian Bale.

Now Zhang is working for Wang. And before he made billions in real estate, Wang was a regimental commander in the PLA. He’s also a mint condition delegate to the rubber stamp National People’s Congress. In other words, Wang’s the consummate Communist team player. Which helps to explain why Wanda Group is so successful given his connections. Although Wang is probably also a genius, so that helps too.

But if you were Zhang and you once made movies of conscience, perhaps you’d hesitate before getting into business with a guy like Wang who is so clearly tied to a Communist Party organization that censors movies like the ones you used to make. Hell, if somebody banned me and my movie, I’d be pissed. Maybe Zhang’s just more forgiving than I?

But you see, as a now Chinese owned studio, Legendary has to get The Great Wall entirely past the censors. This means that every line of dialogue, every scene of horrible computer generated action has to support the message of the Communist Party.

And therein lies the real crime of this movie, not the color of Damon’s skin. If I ran into Wang on the street (as in if I stowed away on his jetcopter) I’d like to ask him straight to his face if all of Legendary’s future movies are now going to have to be approved by the Commie censors?

I ask this because Legendary has made some damn good movies throughout the last fifteen years. I’d like to know in advance before stepping into the theater whether my movie experience got approved by some undersexed-degenerate-apparatchik-tool.

Hollywood (in theory) is supposed to be a land of consummate free speech. After all, it’s freedom of speech, freedom of the arts that enables Hollywood to function. It’s what gave birth to this pinnacle location of the film industry at the start of the movie era a century ago.

But money talks, and Hollywood (most, but not all) values money over principle. So Damon and a whole bunch of other people are perfectly happy to climb aboard a production that is essentially bankrolled by anti-free speech goons provided they get their tasty paycheck.

Seeing as how, like most celebrities, Damon does substantial humanitarian and human rights work, if I ran into Damon on the street (as in if I stowed away on his autogryo) I’d like to ask him straight to his face what he thinks about hundreds of Chinese human rights lawyers and activists being rounded up and convicted in show trials? Or that they’re being forced to read Cultural Revolution style confessions to the public like in one of the heart tearing scenes that Zhang used to put into his movies.

Did I also mention that Wanda Group owns AMC Theaters? Do you like movies? I sure do. Do you like free speech? I sure do. Well, as far as I can figure, I think these two concepts go hand in hand. But if you’re Wang, Zhang, or Damon, I guess you can respectfully disagree. Money!

Here’s the problem though. Wang and Zhang are placing a bet that you can have quality movies in a realm without free speech. It’s the same gamble that the Communist Party is taking all throughout China’s culture. For example, the Communist Party is backing efforts to dramatically enhance scientific research and development, but without the freedom of speech and academic liberty that normally comes with it.

I suspect, just as it’s awfully hard to invent cool shit when the censors are all over you, that Wang and Zhang are going to discover that without freedom of creativity that they can’t make decent movies. They might make a lot of money (see Transformers for the ability of bad movies to make billions) but not actual good art.

Maybe The Great Wall will be fairly decent. Like I said, Zhang is a superb filmmaker. And I really do like Damon as an actor. But for the future of movies, I hope this film tanks.

One thought on “Matt Damon and Zhang Yimou whitewash their souls”