I don’t care what anybody says, both those women were concussed. Alexandra Popp had her skull split wide open. Morgan Brian’s eyes looked like she was strolling through the Land of Chocolate with Homer Simpson. Neither of these players should have gone back into the game.

If this was the NFL, it’d be front page news today. The outrage. The mass hysteria. But because it’s women’s soccer, it’s somehow okay.

To their credit, many media outlets (SI, NY Times, Post) who hammer the NFL with glee do have articles this morning questioning the wisdom of allowing two very clearly injured players back onto the field. But other imperial bomb throwers (ESPN) don’t have a word about it at least a dozen articles deep.

You’ll see this line on this shitty blog again and again, I originally stole it from South Park:

I’m of the mind that everything in life has risks, even driving yourself to work. Sports have risks that need to be managed. Concussions happen. Life happens. And the sports leagues, NFL, FIFA, etc, can work the issue to make it better.  Without sacrificing the core of the games.

Clearly last night needs to get handled better by FIFA. It was not okay. I guess the point of this post is there’s progress to be made to lessen the risks, but the media treats the issue differently depending on what sport’s being played. This schizophrenic behavior serves nobody, nor the issue at hand. 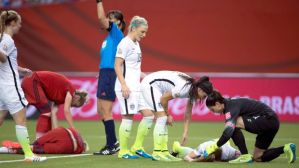 I kept waiting for the ambulance to come out; and ten minutes later they’re back on the field; these two players are real warriors, admirable; but they should have been made to sit down