We’ve all been there. You do something entirely rational. Nothing bad happened. There isn’t a problem. You do it, you move on. But then you spend days asking yourself, so, uh, why did you do that?

Everybody’s got a completely pointless story on where they watched America and Germany play last Thursday. As if to say that on any given day, people normally do not watch a competitive sporting event. So it’s special when you do, and you should broadcast to the planet how you did it.

Maybe you watched the game on an illegal feed in your cubicle. Maybe you watched it in a bar with friends. Maybe you were holed up in a creepy basement in the dark in front of a thirteen inch black and white wonder while sharpening knives. But who cares either way?

Well, I guess a lot of people. Because everybody tweeted how they did it, showed pictures, posted to social networks, told their friends, and so on. It’s like the purpose of the game is to tell folks where and how you watched the game. What was the score? Who cares bro, we were at this bar, out of work, and like, we did shots. Oh, uh, …

So now that I’ve addressed that key issue, I’m going to talk about how I personally watched the game. Because if you foolishly read this far, you deserve what you get.

The ability to take off from work to watch the game? Banned. Why? Well, I have no idea. I’ve reached the point where the decisions and actions of my supervisor(s) are more bizarre than doing long division while having your head beat with a plastic bat wielded by a screaming ten year old girl.

Oh, I can’t take off to watch the game with my family, okay boss. Understood. Thanks for hearing me out. Why boss? No, don’t go there. If you ask, you won’t understand the answer. Move along.

So in my cubicle I was. I knew how the game would end. I figured it’d be close and Germany would win. It’s not rocket science. But I wanted to watch the game because it felt important to me. So I journeyed around like a lunatic looking for an option.

So I ended up huddled in front of the abandoned security guard station, watching it on a very small color square, on Univision (ESPN blocked), with about a hundred of my best friends who I’ve never met. As a separate issue, I was probably the youngest person there, which probably says something about me (not sure what, really).

You want to experience something unsettling? Stand for over an hour with a hundred suit and tie wearing old guys you don’t know, who say not one word to each other as they watch a game in Spanish when none of them speak Spanish. But I didn’t leave, I didn’t walk away.

So the question that’s come up later inside my brain was why?

If the USA cricket team was playing Germany in an important game I’d probably at least care enough to watch. When in doubt, experience the joy of raw primal patriotism. And why not?

In today’s joyful Command & Control world where everything is existential, without happiness, and you must conform to the values of others? Well, this is probably the closest I’ll ever get to cheering for our side alongside the rest of the culture like its 1945. By the time this is over in a month we’ll all go back to hating each other again. Trust me.

Even our favorite Kraut (not our favorite) Herr Klinsmann got in on this by ghost writing an absence letter for folks to take off work to watch the game. It was a neat touch. It had style, class, humor, and was fun to read.

Now it might not have come from inside Klinsmann’s brain and instead got generated by some faceless public relations hack at USA Soccer. But we’re going to go ahead and give our Kraut friend the credit because it’s his signature at the bottom.

But this isn’t the true answer for me. Because as much as I love the Colors, I’d never watch the American cricket team on Univision.

I do enjoy soccer. So this obviously increases my ability to care. But I don’t snake out of work to watch MLS or EPL. So that’s not it either.

Maybe the excuse to depart my cubicle for an hour is enough. Maybe I’ll watch cooking on Univision next week at the same security station. Just to escape. Now don’t get me wrong, I know how lucky I am. There are people literally breaking rocks for a living. But that doesn’t mean I have to enjoy it when I clearly don’t.

The clearest answer I have is one we’ve addressed earlier when discussing this last Super Bowl (not actual Super Bowl due to blowout factor). It’s the event, friends.

Just as 100 million people watch the Super Bowl, when at least 60 million of them don’t follow football, so 60-70% of those who tuned in last Thursday could not care less about soccer. It’s about the event.

You go watch the game in the park with thousands because thousands are there. If you got out of work, even better. It’s cool to have fun when you normally are trapped behind a desk. Go socialize, go live the experience. Go share something with friends and family. The game isn’t the event, the experience is the event.

Why did I feel weird about my situation? Maybe because as much as I actually did care about the game, I was also searching for that experience. I didn’t get it. I got Univision with a bunch of weirdoes like me. So it felt wrong.

Well, we’ve corrected that in preparation for tomorrow’s bout. I took leave from work. I’ll depart my sour box shaped cage early. Going to watch it with family. So I’ll have both the game and the experience. Win or lose, it should be fun. But winning would be nice. USA! USA! … 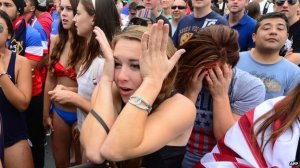