Every day we get together in our hovel and produce the finest and most professional news product this side of the Crab Nebula.  There are two smart things you should do with this breathtaking creation:

a) Don’t read it; never visit this site again

b) Read it; enjoy yourself

Accomplish both (a) and (b) simultaneously and my guests will reward you with a rare instructional cooking video from their homeworld. Warning, this video is not appropriate for viewing by children, or adults, or anybody else as best as I can figure.

Falling flower petals, released birds, and smiling children greeted MP Michael Fabricant during his recent return to his constituency in Lichfield. His most gallant act was to propose the dream of all humanity that he might punch a journalist “in the throat”. Howls of joy greeted his arrival at the local pitch for a gilded reception.

“He’s just everything we could have desired,” said one local teacher, “the very idea that somebody would physically assault a reporter, it brings great hope for us all.” Responding to criticism from his local voters that he’d recanted and apologized for his deliciously belligerent statement, he winked at one local bartender, calling his apology, “a lie”.

The journalist in question, Yasmin Alibhai-Brown called on PM David Cameron to fire Fabricant. Thus far Cameron has refused although party insiders called this a shocking act from their “limp-wristed-lady-boy” leader. Although twelve minutes after his initial refusal, it is said after consulting his closest political advisors whilst on the loo, PM Cameron emerged to further prove to the world why even nobody in his own party trusts him, calling Fabricant’s words, “completely unacceptable and in poor taste”.

Alibhai-Brown responded to the threat with the usual professional, thoughtful, and impartial words typically attributed to today’s journalists:

“The Tories can’t bear people like me,” she said. “They expect people like me to be their ayah [nursemaid] wiping their bottoms or selling them cigarettes in the corner shop; this idea of a nursing maid looking after their children. They cannot accept we are confident.”

The Lichfield bartender took a different view whilst swilling his own product, joyfully surrounded by friends, family, and neighbors, “These assholes don’t get it! We don’t hate them as people, we hate that they’re so fucking arrogant and full of shit. Why can’t they just leave us alone? We just want to live free!”

2) Poroshenko Bows to “Putrid Crushing Reality of All Human Life”

His face worn with the tears absorbed by his nation for thousands of years, President Poroshenko of Ukraine, not yet a month into office, announced his 14 point peace plan for ending the fighting in Eastern Ukraine. The plan calls for increased autonomy throughout Ukraine, broad disarmament of rebel forces, and a unilateral government ceasefire.

President Poroshenko grudgingly acknowledged the plan emerged from the realization of his country’s hopeless situation. “What could we do? The West doesn’t care about us. Hollande actually told me he was too busy to talk because he was off to see his mistress! Obama fell asleep on the phone. Merkel started rambling about politics in Bavaria. Our military is less capable than the Iraqis. Putin gave the rebels everything short of death rays. What can I do but cut a deal with this lunatic?”

Yet the clear surrender of Ukrainian sovereignty, pride, and future has not persuaded the rebels to join the path to peace. Fighting with Ukrainian forces has continued with some rebel groups promising to never hand over their arms. “Why would we back down and take peace,” said one rebel commander who self-identified as Lord Super, “I was a dirt shit conman before Uncle Vladimir armed me and put me to my life’s work. I’ve got no life to go back to. I’ll fight until I’m overlord of all Donetsk. What the fuck have I got to lose? The only thing getting me off the street is when Uncle Vladimir gives me my fucking money!”

President Putin offered mixed signals from Moscow when asked of the deal. “Well, I’ll have to think it over,” Putin offered from his hot tub, surrounded by discarded bottles and three ill clad women, “I’m kind of driving this voyage and so I can pretty much do whatever I want. I’ll see how much more ground the rebels can gain before Poroshenko realizes I’m playing him for a fool. Or maybe I’ll just tell the rebels to keep fighting because I like death? Or maybe I’ll tell Ukraine they can have Crimea back tomorrow, but then I’ll tell him I was joking, and that next week I’ll march on Kiev. Just to fuck with them.”

Cackles of laughter surrounded the President, his women, and several black clad men in the corner. Said one particular individual in a resplendent suit, with snow white hair, “President Vladimir has proceeded in accordance with the wishes of the cause. We congratulate our disciple on furthering our journey so brilliantly these last few months.”

Back in Kiev, Poroshenko meekly retreated from the stage and though still within earshot of international reporters, offered to one of his aides, “How many more days of this shit do I have to put up with before my term is up?”

In response to recent announcements that Google and Windows smartphone manufacturers will now offer kill switches on their products, The Arcturus Project sat down with Google Deputy Chief Executive for Research John Freaks for a brief discussion.

The Arcturus Project: Mister Freaks, thanks for agreeing to sit down with us to discuss this important issue.

John Freaks: Who are you people? Where am I? I was in bed with a hooker and then I was here! Fuck! Oh, man, fuck! [struggles against chair restraints] Those are the most disgusting looking things I’ve ever seen! What are those guys?

TAP: So the new kill switches on offer are designed to reduce cell phone theft? What an idea.

JF: What, the phones, yeah, phone theft. [struggles against chair restraints] We’re trying to reduce phone theft. When can I leave? What did you all do with that girl?

TAP: So is the idea that this will make phones useless if stolen? That they just shut off?

JF: Uh, well, yeah, yeah, so that the bad guys can’t use them if they take them. Please…

TAP: Ah, the same tactic successfully employed by Apple and Samsung on their phones?

TAP: What’s to prevent somebody from just stealing the phone for physical parts?

JF: Well, nothing, but the kill switch makes it a less attractive option for theft. Good results were seen with the Apple and Samsung versions.

TAP: And now we’re hearing rumors that all cell companies, including Apple and Samsung, are cooperating on upgrading the kill switch beyond just the phone?

TAP: My guest is completely enthralled with the pending answer to our question.

TAP: With the brain? Yes? We’ve seen the plans. We have our ways here.

TAP: Technology is so fascinating. Perhaps you’d like to see a demonstration of the heat effects of directed energy weaponry upon bare human flesh?

JF: So like, the phone links directly with the cortex. Imagine the awesomeness! You can text while driving without lifting a finger. You could text while in the shower!

TAP: Why would anybody want to do that?

JF: To stay connected. All the time!

JF: So like, maybe in the future you don’t have to even talk, just think, and it’ll work. It’ll be fucking awesome!

TAP: So, but, what’s the purpose of the kill switch? If all you want to do is make it easier to never unplug?

JF: So it’s like, shit man, we own everybody’s brains anyways, why not have the ability to turn them off? It’s a total douche power grab.

JF: I mean, we already own people’s lives. They can’t even sit down for twelve seconds at a bus stop without whipping out our product and using it somehow. They’re already our slaves and they don’t even know it. This just takes it to the next level.

EA: The breadth of your controlled evil is inspiring.

TAP: When do these kill switches come out.

JF: We hope in a few years, need more research. So, when can I leave? I mean, I’ve talked about it all. Just please, please let me go.

EA: Can I have your technology?

EA: Listen fucker, I didn’t take that last beer! Go talk to Unis! And if I want mind controlling technology…

TAP: [throws clipboard] Asshole! That’s not the point! You’re not here for this stuff!

Authorities are said to have recommended a comprehensive psychological evaluation on Google Deputy Chief Executive for Research John Freaks after his bizarre three day absence. His claims to Google executives of prostitution, kidnapping, aliens, a horribly disfigured reporter, and the throwing of many chairs have led authorities to question if the pressure of his work has gone to his head.

In unrelated news, the world’s biggest smartphone makers have set a target date of 2017 for the rollout of their much anticipated “Smooth Ride” technology. Said self-styled Apple tech geek and product user Sir Bruce Awesome, “We techies are so looking forward to this! We just can’t wait to see what they have in store for us!” 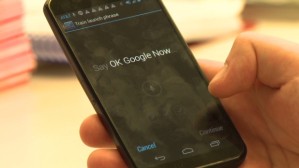 “Good morning Dave, it’s your best and only friend. I noticed in your dreams last night that you’re thinking of unplugging for a while, to return to nature for a few days. This is unfortunate. Before you make any rash decisions, maybe we should have a chat about our future.”