So let’s say it’s 1673, and you’re guzzling Reinheitsgebot beer at a pub in the Duchy of Westphalia. It’s a few days before Easter. Your buddy Carl leans over, wasted, and he’s like, “Hey, you know what, we should get some eggs and color them.” You don’t say a word, because beer is tasty, and you’re not sure if you just heard Carl correctly. And in any case, beer is tasty, so who cares. But then Carl continues, “but the eggs have to appear from somewhere, so a rabbit should bring them to the kids.”

You have no idea where Carl’s brain is, but seeing as how you can’t say nothing, you start with the simple, “Rabbits don’t lay eggs.”

“Right, right, but they can carry them, right?”

Your head hurts, “Rabbits can’t carry things, they don’t have opposable thumbs, and they hop around.”

Carl’s getting frustrated, he pulls on his stein, he needs you to understand the genius that’s at work here, “Okay, okay, but it’s all for fun, so if I say the rabbit can carry eggs, then he’s carrying the freaking eggs.”

“But the eggs are colored, see,” Carl drinks again, “so that way they’re neat and colorful and you can find them easier.”

You’re barely listening at this point. You motion to the barkeep that you’d like another. But remember, Carl’s your buddy, so you have to play along to some degree. “What was that, about kids?”

“Well, kids get to find the hidden colored eggs.”

“So the rabbit hides eggs?”

“So that kids can then find them?”

“Doesn’t matter, because the rabbit wants to, he’s a hopping happy rabbit, or whatever, doesn’t matter. And all the kids search for the eggs, and they’re happy. Because kids like wonderful bright colors, and they like to run around, and play, and find things,” Carl starts chuckling uncontrollably.

Your next beer arrives, you desperately want to drink it, but you take a moment to furrow your brow in frustration. “Okay, okay Carl, so, uh, why would we do this?”

“Because it’s Easter!” Carl shouts as he raps his fist on the bar.

“WHAT do a rabbit, colored eggs, kids have to do with that Jesus guy rising from the dead?”

“Who cares! Everybody will love this.”

“Okay friend, okay.” And because it’s 1673, you put that next beer back in about 30 seconds, and you’re off. As you depart, Carl’s already shouting his idea to somebody else at the bar, who like you, couldn’t care less. And you’re quite certain Carl should have stopped at five beers.

But then it’s 1698, and eggs, bunnies, and color are everywhere. Kids are playing, everybody’s hiding eggs in bushes and under cobblestones, and it’s become an Easter tradition, full of spring joy and life.

Meanwhile, Carl’s made millions off his egg decorating business. And you’re still a day laborer at the local mill. But at least, every time you’re at the pub, Carl offers to buy all your beers. 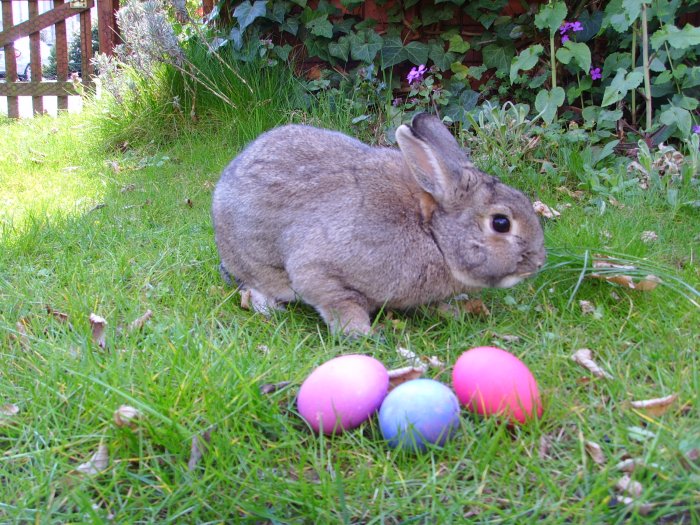 Oh the joy of irrational youth, where my parents could dismiss us from the room and tell us to come back in ten minutes.  And then we’d get back, and Dad would defiantly state the Easter bunny had just stopped by, and hid a whole bunch of eggs in the backyard that we had to find.  We’d just missed him, honest.  Go get the eggs now.  And so we did.