Nobody wants to live in a state of perpetual crisis; to get pounded every single day in the head with awful reality.  So Uncle Vlad has sounded rather charitable lately.  And so do his Western counterparts.  Now that the drama’s subsided, everybody wants to get back to normal.  Vlad’s backed Ukrainian elections, pulled some troops away, and didn’t resort to screaming like the lunatic he is when Prince Charles called him exactly what he is.

By the way, you have to applaud Charles for speaking the truth and the not backing down.  When you see how the three big men of British politics responded, you affirm quite a lot of who they really are:

Cameron:  The Prince… “…everyone is entitled to their private opinions.”

Clegg:  The Prince… “…free to express himself.”

But it’s okay you tart Brits.  You’re not the only ones led by a walking corpse.  Monsieur Hollande still can’t bring himself to not sell amphibious assault ships to Vladimir.  Apparently because he says that once you sign contracts, they are sacred.  Oh, I get it.  So Vlad can violate international law and multiple signed treaties but the French will be damned if they break a single contract.  This is to say that Vlad could invade Poland and burn Warsaw to the ground.  But as long as it doesn’t lead to the loss of five-hundred union jobs in Saint-Nazaire, Hollande would respond, “Meh, [French shrug] what can you do?”

Vlad is not happy with Charles.  For once he almost seems to whine just a little.  He doesn’t like being compared to one of history’s greatest monsters.  But they’re essentially the same kind of guy.  Except that Vlad has a much lower body count and is in the end rather less successful in achieving his goals up front.  But Charles is right and both Vlad and Hitler see Europe the same way.  Unfortunately for us all, there’s no Churchill or de Gaulle waiting in the wings to turn things around.  And so this will go on and on.

Everybody in our blessed Western establishment governments and businesses want things to go back to normal.  The West needs Russia for gas, for oil, for cash, on Syria, Iran, Afghanistan transport links, nuclear proliferation, and about sixteen other major actions.  But to push Ukraine to the side and get back to normal in the pursuit of these goals misses the gravity of the damage Putin has recently wrought to the West and the world order it claims to represent.  This one you can’t let slide.

In two weeks Vlad shows up to the Normandy commemorations of 06 June.  Oh, yeah, if you didn’t know, Hollande has not withdrawn the invitation.  So in two weeks all the “leaders” of the West are going to stand side-by-side with a leader who’s just recently gone against everything those who fought at Normandy stood for.

They’re going to let him get away with it because they think they need him.  They require his Russia so they can get back to normal.  They might as well kidnap five Ukrainians off the street, take them to Sword Beach, and urinate on them atop an old Nazi coastal gun box.  And while they’re at it, walk over to the cemetery and spit on the graves of the fallen.  It’s the same as standing next to Putin after what’s happened.  It’s a disgrace. 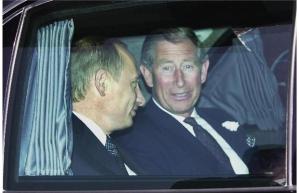 “Well Vlad, you have to know, you’re a filthy Hitler shit.”