I’m starting to believe there is no such thing as real breaking news anymore. Instead, we are treated to old themes that the media usually ignores, but then makes new when they bother to cover. In raising these issues, the goal is to grab your brains long enough for them to acquire cash via the grasp of your eyes.

When they’re done with you, the crisis will remain, but the media doesn’t care because at that point they’ll move onto the next catastrophe and hope to catch you with that. In the meantime, the world burns on.

We’ve blogged a few times on Nigeria and Boko Haram, so I’m not going to rehash the background. If you know anything about this situation your initial reaction was probably along the lines of:

“Why is this a surprise to anybody?”

While the majority of the planet was at the mall, Boko Haram has been brutally executing young girls and boys for years. It’s just that this time they’ve decided to kidnap girls from a school instead of taking them onto the playground and shooting them in the head.

I don’t understand the new mass hysteria from either the planet or a Nigerian people who’ve suddenly decided to take to the streets in protest. It’s okay to overlook when Boko Haram burns children alive, but now that they’re in the mass kidnapping business we need to do something? Nothing about that line of thinking makes sense.

Oh, the Nigerian Army needs reform? It’s been that way since 1963. Get in line. Oh, the Nigerian government is a structured kleptocracy that is unresponsive to the needs of the people, even for the most basic of security needs? Where have you people been for four decades? Oh, at the mall, right. Sorry.

When you make it a point to disregard a problem? Don’t come back later when something ‘dramatic’ happens and then shout your outrage that the evil exists.

I’m calling this right now. How can I do that? I’m not a genius, I’m an idiot, but I just read things. At least you’re reading this. Your neighbor probably reads nothing.

b) Negotiation is the only option

d) Even the most precise, expensive surveillance assets offered by the West will not locate these girls

e) If it takes France years just to find one abductee in this lawless, limitless ground, what chance do we have with hundreds of girls?

They’re doomed, friends. Life is shit. These girls have just had their lives destroyed. I recommend you either get over it, or start paying attention on a routine basis. Only when we as a planet make it a point to watch en masse will we be able to determine what we’re going to do to ensure this never happens again.

Because you know what? Next week you won’t hear a word about these girls on the news. The majority of them will still be alive, abducted, and in turmoil. But you won’t see them on the screen, because the world will have moved on. I invite you to not forget. Make it a point to stay informed. Either that, or go back to not caring. Whatever your conscience is comfortable with. 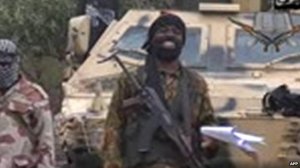 The fact that this man is smiling, tells you all you need to know about how he views our modern world and its desire to stop him