It’s usually just not that hard to know who will win.  Folks get paid billions to inform leaders what’s “really going on”.  I find this humorous when a five year old could call this game.

So Bashar al-Assad, Dictator & Murderer, Former Medical Professional, and Child of Satan has been in the human life extinguishment business for over three years.  He’s able to do so for a variety of reasons.  To keep this post relatively brief, let’s just go ahead and acknowledge one key advantage while ignoring the rest for a moment:

Assad has all the tools of modern combined arms warfare at his disposal.  His enemies do not.

Armored vehicles, jets, and heavy artillery are machines that make Death happy.  Assad’s had them in play almost from the beginning.  At first, the rebels had the initiative because it took time for the Syrian Army to learn how to use these weapons in a coherent and skilled manner.  They’ve figured it out.

And they’ve also come up with some really neat inspiring methods.  All hail the dark ability of mankind’s children to butcher each other in the most unique ways.  Who would have thought that a 55 gallon drum would be one of the world’s most effective urban warfare munitions?  Well, enjoy it, because I’m sure we’ve not seen the last of that tool, in Syria or elsewhere.

Honestly, I’m shocked the rebels have lasted this long.  I think the only thing going for them is Assad, even with Hezbollah reinforcements, just simply does not have the manpower to take this to the end stage.

All the while the Western world and a few Gulf States have claimed to support the rebels with the things they need to win, or at least survive.  The problem is that nothing they’ve been given thus far is a game changer when you compare it to the weapons handled by Assad.

Assad is given new vehicles by Russia.  Qatar hands out body armor.  Syria gets replacement parts for its attack aircraft.  The United States delivers combat rations.  No chances to guess who wins this one.

Guess what kids, this isn’t going to change anything.  Nothing.  This is just enough to make stupid people think the Western world is doing something to help, when they aren’t.  It’s the illusion of support.

Here’s a short battlefield tutorial for those who think Call of Duty is an accurate representation of modern war.  It does not matter how many man-portable anti-tank missile systems you have when:

2) Your enemy can still call in the necessary air & artillery strikes on all your positions; before they let their vehicles get into your anti-tank missile’s range

3) Your enemy, when required, can still switch tactics and send in the light infantry (Hezbollah) ahead of the tanks to slay your anti-tank missile teams before the armor is brought up

Thus, despite what the Washington Post says, this changes nothing.  It’s just noise.  Sure, some Syrian armor is going to get caught, but it’s not enough.  The Syrian rebels have had variations of accurate and powerful Russian made anti-tank weapons they’ve stolen from the army for years.  It’s never changed the course of the war.

But let’s just say for a second this matters, it still begs the question:

Why did this take so long?

So apparently the West doesn’t give sophisticated weapons to the rebels because of terrorist chain of custody concerns.  Well, what does that have to do with the TOW system?  Why didn’t we hand these out like they were candy two years ago?  A TOW system needs at least three guys to use it right, or a truck to move it around.  They aren’t putting this thing in their checked airplane baggage.  Or sneaking it past some drunken border guard.

They should have handed these out in the thousands two years ago.  They probably have a limitless amount just sitting in NATO warehouses where they’ll run out the clock until they’re demolished at the end of their shelf life.

But the true explanation gets back to what we talked about earlier, both above and in previous posts.  Russia and Iran are in this to win.  The West is not.  War’s over.  Sorry.

The guy in this article, Adwa, says of the delivery “It’s psychological more than physical.”  But then he just about sums it up when he says this:

“The government’s friends were more faithful than our friends,”

They should chisel those words onto the West’s tombstone.  Adwa’s a brave man, but he’s on his own.  And in the end, even if it takes ten years, he’s going to lose. 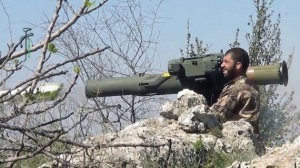