We had to pick a dish to bring for the work potluck.  I chose potato salad, because it was easier than telling work I don’t like them and refusing to play.  So we decided to spice things up and make a potato salad that nobody on the planet had ever had before.

cook the bacon over medium-high heat in a saute pan until it’s nicely done, remove bacon and set aside; discard all but about 1 Tbsp of the bacon fat from the pan; add the onion and cook until browned, add the brown sugar, lower the heat, and slowly caramelize the onions

preheat the oven to 375 degrees; wash the cubed potatoes in a colander, add them to a bowl and toss with the vinegar, garlic, 1/2 of the lemon juice, salt & pepper, paprika, and olive oil; dump the potato mixture on a baking sheet covered with aluminum foil and roast, stirring once, for about a half-hour until the potatoes are crispy but not overly brown

meanwhile, hard boil the eggs, cool them in the fridge, then peel and dice them

in a large bowl, add the potatoes, then add the mustard, mayo, sriracha, capers, remaining lemon juice, onion, bacon, eggs, and cheese, mix them all up until it’s a nice salad; serve immediately hot, or later on cold

Cube the potatoes to a size you like and then wash them in a colander to get the starch off.  In a large mixing bowl douse the potatoes with the vinegar, garlic, juice of half the lemon, salt, pepper, paprika, and olive oil.

Cut the garlic to a size you like.  I minced it because you never know how much folks do or do not like garlic.  But, if I’d been cooking for myself I’d probably just leave the garlic cloves whole and roast them as is.

Make sure you mix up the bowl really well.  You want the paprika, vinegar, and olive oil to really coat all the potatoes.  After that, aluminum foil on a baking sheet and bake them.

Do not pre-grease the aluminum foil.  As you stir them yes, they may tend to stick to the foil so don’t make the mistake of not stirring them at all during the roasting.  You want the potatoes to be brown but not overly done, just slightly still firm.  It’s potato salad and not true fully roasted browned potatoes.

You’ve got regular old bacon and hard boiled eggs which are staples of many potato salads.  I add caramelized onions because I love them and want to share that love with all humanity.

When you’re done making the bacon, eggs, onions, and potatoes, it’s time to mix it all together with the remaining ingredients. 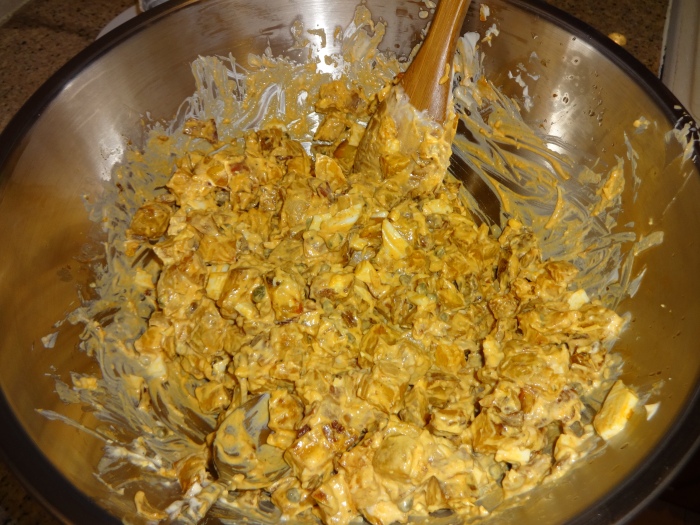 Use whatever mustard and mayo you prefer.  The sriracha is flexible with another hot sauce if you want.  Go with what you like.  But please put some kind of sauce in there because it’s money and not boring.

The capers add a nice extra touch for my taste.  If you don’t like capers, you can skip this part.

As with before, make sure you really get a good mix in the bowl so all the sauces coat the potatoes all over.

You can serve this immediately while it’s hot, or chill it and serve later cold.

Be advised, this will not really keep in the fridge for more than about two or three days.  After that time, the moisture starts to separate from the potato mixture and the salad becomes dry and tough.

This is easily tackled by reheating the mixture in the microwave for about a minute to loosen it up again.  But, generally speaking, I’d eat it all within two days for max tastiness.