This degenerate blog is just a little over three years old and slowly approaching 400 posts laced by the ramblings of an insane man.  But we’ve never done a recipe before despite the role food plays as one of the delightful pillars of my life.  Don’t know why it took this long, probably cowardice, but now it’s done.  There are others.  They’ll eventually make it up here too.  Good times.

in a pot, bring the chicken stock to a boil and then let simmer

reduce the heat to medium, add the red onion and garlic, and cook until the onion begins to wilt, add the sugar and continue to cook the onion until it’s very brown

add the rice and stir so that all the grains are coated, cook for one minute

add the red wine and stir, scraping the bits off the bottom of the pot, add the tomato paste, salt & pepper to your taste, and all the spices

when most of the liquid has absorbed, add 1/2 cup of the chicken stock and stir frequently until the rice is just starting to stick to the pot again, repeat 1/2 cup at a time with the remaining stock

while the rice is cooking, roughly chop the chard leaves and dice the stems

when all the stock has been used, add the chard leaves, chard stems, and diced tomato, cook for about five minutes until the dish has a creamy texture

return the sausage, remove from the heat, add the parmesan, stir, and serve immediately 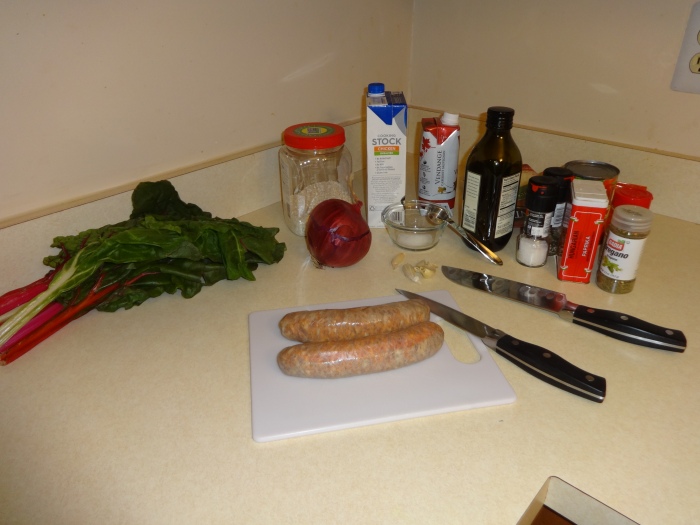 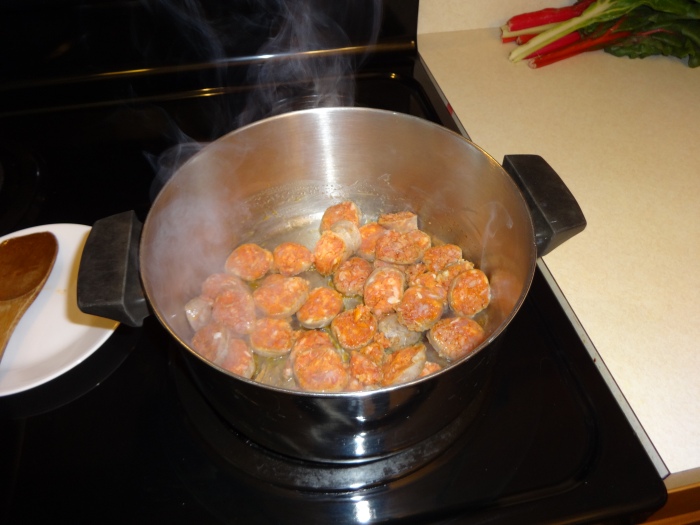 The recipe works best with any kind of Italian sausage.  Pick your favorite and run with it.  Use a slotted spoon to transfer the sausage to a plate after it’s browned.  You can skim off some of the remaining fat before you add the onion if you want, you know, if you’re crazy. 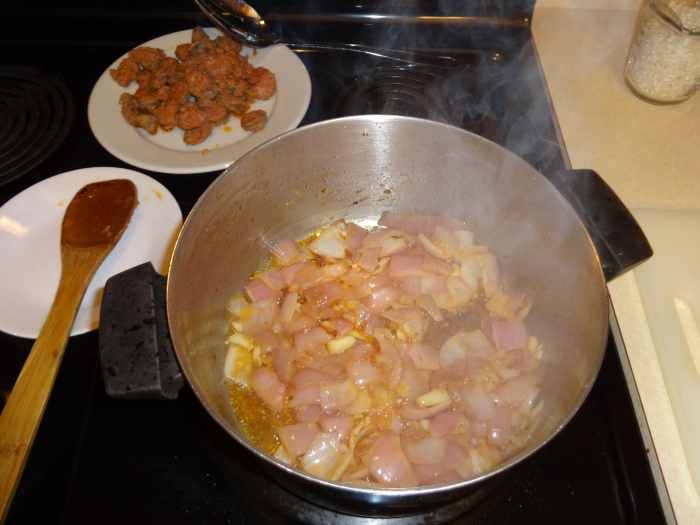 We’re using the onion, garlic, and sugar to get a nice brown and rich mixture.  You can turn the heat down and really let this process play out if you want for as long as a half hour.  Until the onion has a brown sheen that blinds you with it’s deliciousness.  But that’s not required, you can get it done in ten minutes, just keep cooking the onion until you get the browning you like.  If it starts to stick to the bottom of the pot, run with it, we’ll get that stuff off later.

When you add the rice it always strikes me how little all that looks.  But then that rice will grow into tasty fun.  Make sure you coat every grain with oil, let it cook there for just one short minute.

Get the red wine in there and start scraping the awesome stuck bits off the bottom of the pot.  Stir once every few minutes to make sure the rice doesn’t stick to the bottom of the pot anymore.  Use whatever red wine you like.  Whatever you do, don’t drink the rest of the box or bottle with your friends and family.

My little cooking buddy.  She likes to wrap herself around my feet while I’m at it.  She enjoys being close, and it’s prime real estate for mistakes that result in food falling on the floor.

Ladle 1/2 cup of the stock in at a time, keep stirring so nothing sticks, and just slowly let the rice do it’s thing.  Risotto is actually really easy to make, it’s just that you can’t leave it alone for more than a few minutes.  You can’t stir it and walk away for twenty minutes to chase the dogs or kiddies, do your taxes, contemplate the concept of dark matter, or binge watch the latest drama where everybody dies.

I love chard because of it’s bitter notes and the color.  If you don’t like the bitter, you can just dump in a bag of spinach from the store, it’s all good.  Just get something green in there.  I dice up the chard stems and then add them too.  This gives the risotto a little crunch, and also is of the mindset to never throw out any part of the ingredient you can use somehow.  But, if you don’t want to go down this road, it’s perfectly okay to just use the chard leaves and cut off / around the stems. 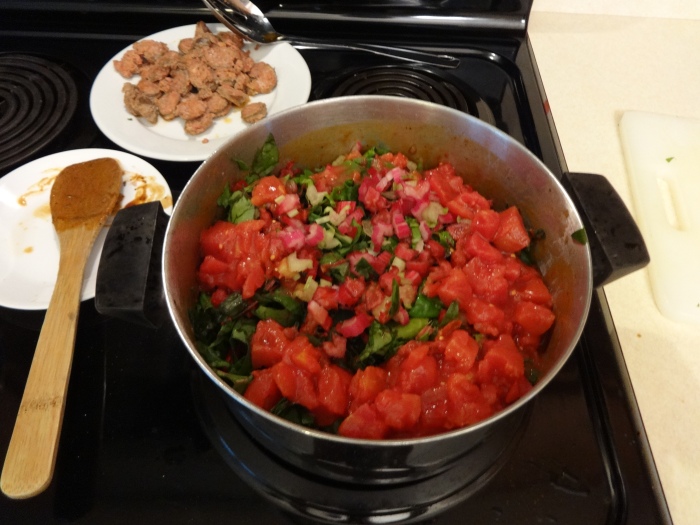 Toss in all those leaves, stems, and the tomato can contents.  Stir quickly and thoroughly until it’s all combined.  Be careful, at this stage the rice can really stick fast if you don’t get that chard’s liquid sweated out, so keep on stirring as required.

Cook for about five to ten minutes or until the rice is starting to stick no matter how much you stir.  Get the tasty sausage back in and remove it from the heat.  Add the parmesan and stir it all up.  I used bagged parmesan here.  The best is probably to grate it off the block if you can but the bag works just fine.

Serve the risotto immediately while it’s nice and hot and before it starts to seize up.  For leftovers, you might need to add a little water back into the risotto before you reheat or microwave it.

You can eat this as a main dish, or as a side dish alongside other Italian type cuisine.