South of my remote office that works has me travel to is a quaint town that deserves the title of village.  It’s like something out of a time warp where restaurants, antique shops, Andy’s office, a small town non-evil lawyer, town hall, Skip’s Hammer & Nails, and the local fire station all surround an open park that families play in with their children.  I’ve not seen this kind of thing much in all my travels.  I’m not sure this idyllic existence was ever that common to the human race.  It sure seems pretty sweet though.  Everybody in this village is very friendly, if they do still possess a little bit of arrogance.  But hell if I lived like that I’d probably think I was awesome too.

Anyways, one of the restaurants around this park I’d been to before.  I got their tasty Asian themed burger last time.  It was great.  So naturally they no longer offer that.  Instead, the chef seems inclined to go high end.  And so a whole bunch of fancy and/or rare foods were on the menu.  I normally don’t go down the road.  I likes what I likes.  But the menu was short (which is fine) and so I decided to try things I’d not had before.  I cook all the time, but for the most part it’s just basic stuff.  I don’t usually buy or use too many fancy ingredients.  So all of this was new to me, in particular: black truffles, duck eggs, and bone marrow.

The result: I basically shrugged.  People I greatly respect in the food world talk up this bone marrow thing like it’s the nectar from the Sinai.  It was different, it was good, but it wasn’t something I’d have again over say, a good steak.  Maybe this village joint just didn’t do it right?  I’m not sure.  What I do know is that I didn’t understand the hype on any of this.  It was rather unfulfilling.  The night after I went to another town and a place I’d been before and went the burger route.  That worked out well.  I was satisfied.

I will say, mine didn’t look like this.  So maybe they did indeed not do it right.

But the thought arrived in my crude brain, is rarity a delight in its own right?  Why yes, I think it is.  Sort of.  Let’s take these few belligerent examples.  To understand where I’m going, pretend for a moment that you’re a pretentious asshole.  As in, imagine you work for Goldman Sachs (offers finger to gilded palace level):

1) You are offered an omelet made of endangered condor eggs

2) You are presented beer brewed with water from The Moon

3) All the forces of science were used to cheat nature by recreating the dodo, just so they could kill it and you could eat it 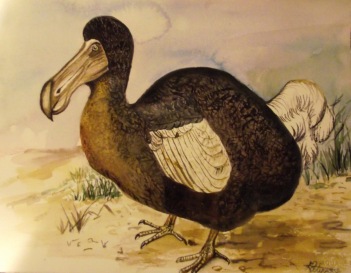 Coming soon to a plate near you.  Seriously, in your lifetime, somebody will attempt to do this.

We don’t have to necessarily go down this weird road though.  How about:

a) You drink a microbrewery’s beer.  It’s fairly decent, but nothing exceptional.  But you come back a month later and they’re out of business.  You will never be able to drink that beer again.  Was it that more special?

b) In your travels you experiment with a dish that cooks pork in a unique way you’ve never seen before or will again.  It’s nothing crazy, it’s just freaking pork, but it’s different, it’s good.  Will you miss this rareness a decade down the road?

To me, rareness or uniqueness is more along the lines of (a) and (b).  This kind of thing appeals to me.  (1) through (3) or bone marrow, eh, not really.  Not sure what that says about me, but that’s my take.

So then, the thought also crosses my feeble mind of what occurs when rareness disappears.  Even if you think bone marrow is liquid life, what happens to you if you have it every single darn week?  I suspect it loses the edge.

Everybody is once again on the cliff’s edge about Star Wars.  Yesterday, I saw a guy driving a Nissan Rogue where he had stenciled in cursive handwriting the word “One” after the Rogue lettering.  This means he’s even more of a loser than I.  A brief aside, how has Nissan gotten away without the evil corporate stigma that VW has?  Nissan has openly admitted to cheating fuel standards recently too, but nobody cares?  Whereas VW is the devil?  Eh, maybe folks just love to hate the Krauts?

Anyways, soon Stormtroopers and Darth Vader will be everywhere again.  You’ll stroll out toward your car in the dark of the morning and Boba Fett’s going to be standing by your mailbox smoking a cigarette.  And you’ll just shrug and start your engine because you expect it.  Here’s the thing though, I think it’s going to die down.

These two dudes are going to show up to cut your grass.  You’ll shrug and give them the check.

Star Wars 1977 to 1983 was special.  Then George destroyed it.  So when Force Awakens appeared folks were just begging for some kind of victory.  They mostly got it, the world stopped for it.  Now everybody is looking for the ride to continue with Rogue One.  But, what happens when that rareness disappears?  Disney has 17 Star Wars films in development as we speak.  I suspect that rarity’s going to disappear.  You can only swallow so much bone marrow or Star Wars before you can only shrug.  It’s human.  In the best of our nature, we love to try things that are different.  We seek the adventure.  Things we eat or watch repeatedly can become less special, less unique.

Or maybe I’m just an idiot.  Maybe I’m wrong.  For example, I do love those burgers.  You can make a burger exactly 2,748 different ways.  I’ve only tried 73 of them.  I want to try the rest.  So maybe, just maybe Star Wars has 135 films left in it before everybody stops caring.  I assure you, Disney has it in them.  So we’ll find out, one way or the other, whether I’m right. 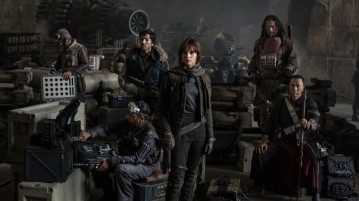 Most if not all of these Red Shirts are going to die.  They told us so in the original movies.