I will admit I am rather surprised to see this level of violence.  You would think Uncle Vladimir would have asked Cousin Viktor to hold off for at least for another week until people can no longer spell Sochi.  I think a couple of things are at work here:

–  Cousin Viktor may have been told to wait for a week by Uncle Vladimir; but likely told him to go back to watching figure skating; Viktor knows a week may have closed out his window; thus the assault on Maidan

The security forces’ attack did not go according to plan.  Syria has shown what you need to truly crush this kind of revolt:  An army or police force that is willing to employ automatic weapons against unarmed civilians like it’s the Fourth Reich come to life.

Some countries are perhaps not meant to be.  I heard an interesting stat on the radio yesterday.  About 40% of Ukraine’s population supports the protests, while 40% support the government, leaving 20% who are too dazed or stupid to respond to reality.  However, a very large majority from both sides do not support Cousin Viktor.  This is not a recipe for a sustained nation.  You can easily see how the Russian eastern half could make a push to remain in charge or transfer to Russia while the western half goes elsewhere.  Anybody think this will all occur cleanly?

This is only going to get worse.  A line is now crossed.  When this much blood is shed, emotions & then positions harden.  Cousin Viktor is now about to learn a very important lesson of our cowardly post-modern world.  When you spill your citizen’s blood, it’s not as bad as you think.  I suspect he’ll actually be rather surprised at how little the UN, EU, and/or USA will do to him and his ruling elite.  A lot of talk will occur, but Viktor’s going to discover that he can still act while everybody else talks.  Then the only limiting factor on whether he can remain in power is how willing he is to kill and whether his men are willing to obey the orders to slay their neighbors.  Either way it’s going to be awful. 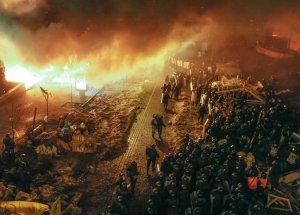 “I am the hand of God, the fate of all lies in the decision I make.”