You’re supposed to bring home at least one item from every country if you can, or at least every trip.  How does one do this though if you’re constrained to one backpack?  For this reason and many others, I don’t really have too many corporeal possessions from my travels.

But sometimes you pick up an item that you find a way home any darn way you can.  I think I shipped my Fuji stick home via 1912 British Imperial tramp steamer.  I made it happen.  It cost me 13 pounds, 6 shillings, and a bottle of my finest barley swill.

If you ascend Fuji, you have the option to take the wooden Fuji stick.  Not everybody does so.  Those who’ve been up multiple times have no need.  Some folks consider it a vicious tourist trap kind of thing.  But I just think it’s too cool.

The idea is you start out with this bare piece of wood.  At various way stations on your journey up, they use a hot brand to burn logos into the stick.  Here’s a shot of mine of a local carrying one up where he’s taken the flag off.

Of note, whereas I left my Japanese flag on my stick, see how the local has taken his off.  I attribute this to the difference in patriotism between your average Japanese and say an American.

For example, my Parents have always had the Stars & Stripes flying outside their front door.  Always.  You would not see this type of behavior from almost any normal Japanese family.  Patriotism is a very different mindset between the two countries.

The Fuji stick takes this concept into overdrive as the flag that adorns it is not just any flag, but the older Rising Sun Flag of Imperial Japan.  I don’t know why Fuji chooses this over the modern and less controversial single red circle?  But anyways, a lot of locals took their flags off their stick.  Don’t get me wrong, it doesn’t matter to me either way, I just find the concept interesting. 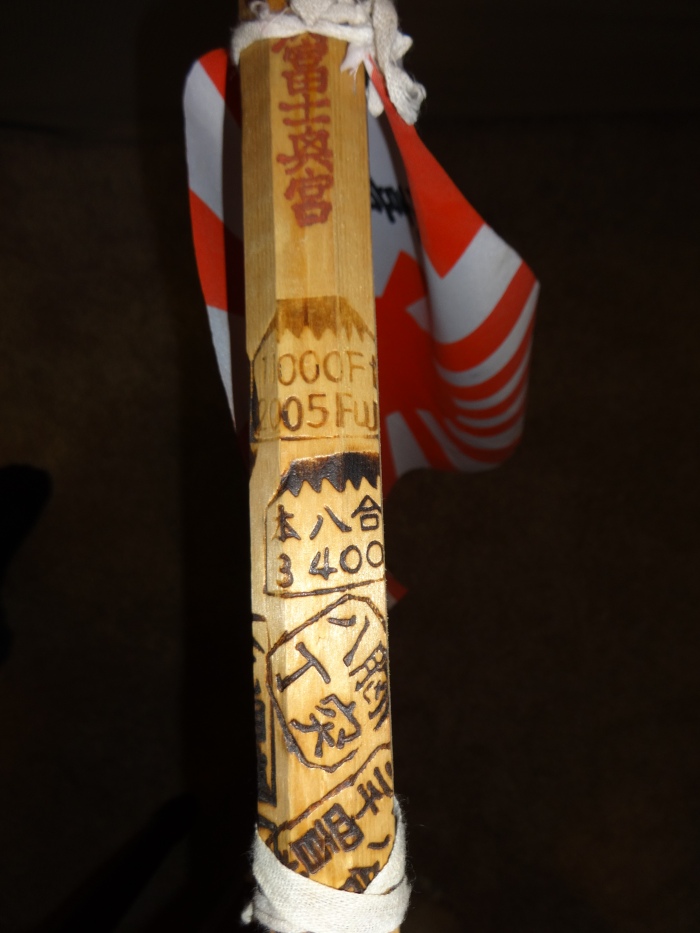 My Fuji stick sits right next to my home desk, always.  You can actually catch it in the background of an old shot I had for a previous post where I talked about beer.  Win.