When you travel in groups compromises are always necessary. When the group disagrees you can sometimes divide up or sneak off on your own for a while. Other times you just have to deal with it. When you share hotels, cars, buses, trains, and meals with your companions, it’s generally not a good idea to fight all the time. I’ve been on trips where this happens and it truly kills everything.

Being in Turkey I had about five-hundred things I wanted to do, history being at the top of my list. So when we were headed to Ephesus I was fired up. We only had one day there. I could spend six days in Ephesus and not get bored. But then, other members of the group wanted to take most of that one morning and visit the supposed House of Mary which is near Ephesus. I hear this and I’m like, “Oh, uh, …” [checks watch] (I did indeed wear a watch then, which seems strange now.)

I was raised Irish / English / Sicilian Catholic, so you know it’s seriously in my blood. But I was also raised with a light touch of it. My own Grandmother would frequently talk with us about this or that doctrine, Pope, etc, that she disagreed with, alongside her own take on life. It’s a very liberating American take on religion. Nowadays, depending on the barometric pressure outside, I can either truly believe or am an atheist or whatever. A lot of it depends on my mood. So basically I would not consider myself very religious, but I really do try. In this Turkey travel group though were several ultra-hyper religious types. So they wanted to go see the House of Mary and were very set upon it.

Given how much of Ephesus was on my brain I could have protested. I let it go in the name of cohesion. This was the right choice. I figured it would be nice to see the mountains, maybe say a prayer, and generally just enjoy the ride. This was exactly what happened. I don’t regret it.

The full titled House of the Virgin Mary sits atop Mount Koressos which is a few miles from Ephesus. It’s a small house and religious shrine. By which I mean it’s a religious shrine that reminded me a lot of the shrines in Asia, specially Japan. As in, it’s a commercial tourist destination. There’s very little religion about it. In say Japan, sometimes you’ll be walking around temple grounds and there’ll be these people hocking Hello Kitty fascism toys from stalls. I always found this odd, to me a dead quiet church is my pinnacle of prayer. But in many cultures it’s not a big deal to meld commercial and religious ideas on the same site. This is the case with Mount Koressos.

It’s like going to the Mary exhibit at Disneyland. There are several cafes, a wishing wall, tourist buses everywhere, magic water, it’s quite the atmosphere. And this place has quite the crazy tale as well. My first thought was, “There’s no way Mary was there.” I mean, what do I know? But still, it didn’t seem quite likely to me. I get it, Popes have visited this place, but still. Feast your brains upon this tale of discovery:

– Anne Catherine Emmerich, German nun, mystic, and later saint, has a bunch of visions which she imparts to the brains of others.

– Clemens Brentano, author, writes books based upon her visions about Jesus, etc, etc.

– In 1852, Brentano provides a rough description from a vision of a house near Ephesus that John supposedly built for Mary where she lived out her days.

– In 1881, French priest, Indiana Jones copycat, and lunatic Julien Gouyet uses this book’s description to find and identify the house on top of Mount Koressos. Nobody believes him.

– But by 1891 at the urgings of Sister Marie de Mandat-Grancey, folks get onboard with this idea and the house is made a shrine and taken under management. The first Pope shows up within a decade. Half-a-dozen other Popes have also visited.

So is one to believe this tale of visions, translated through a kook author, and a bunch of people wandering around the 19th century Ottoman countryside with a book in their hand? I’d have to say I don’t. I’m pretty sure that whatever Mary was that she died close to her birthplace and is buried out there. But whatever, it’s all good, people can pray anywhere. That’s the cool part about prayer.

And whatever the house is, it is indeed neat to visit. It’s very old and probably a good example of the style and architecture of ancient dwellings in this part of the planet. 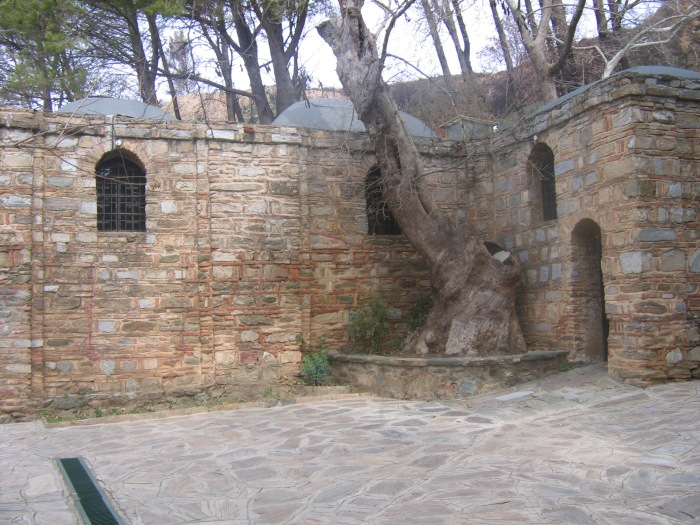 Side of the House of the Virgin Mary

When there, I kind of separated myself from the group and puttered around. When you go inside the house it’s a converted chapel, very small. I didn’t take a picture inside as it didn’t seem right. I prayed for a short bit and then was on my way. It was a nice moment, but not what I would call any kind of religious experience. 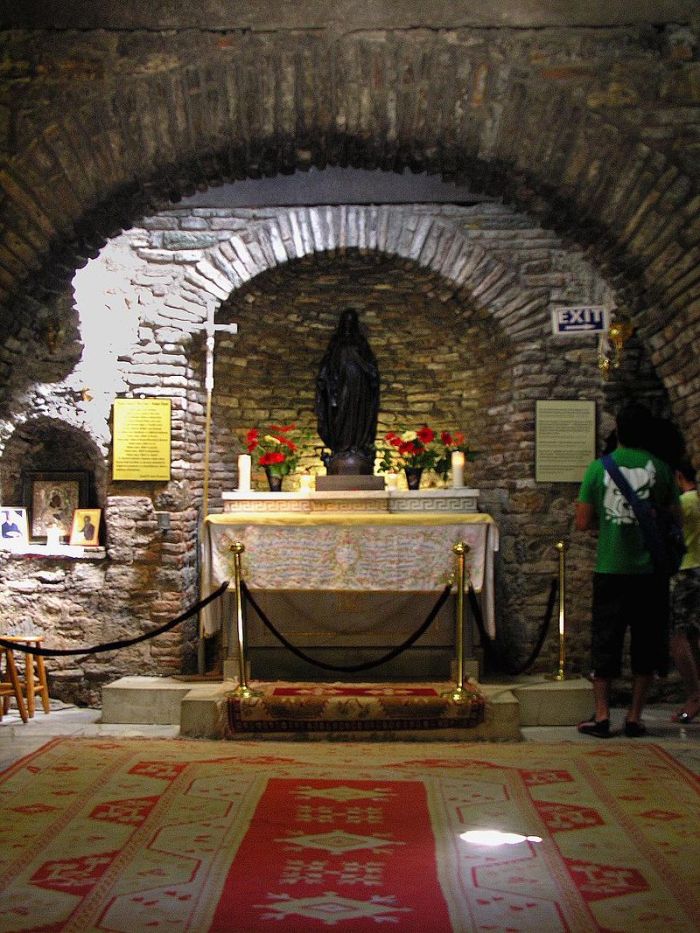 Outside there is a wishing / prayer wall that folks can leave notes on. There are thousands of notes. There is also a water source that is said to heal or grant wishes or whatever. I did not drink the water

For me, the ground was the better experience. This was my chapel visit.  This was my Mount Koressos: 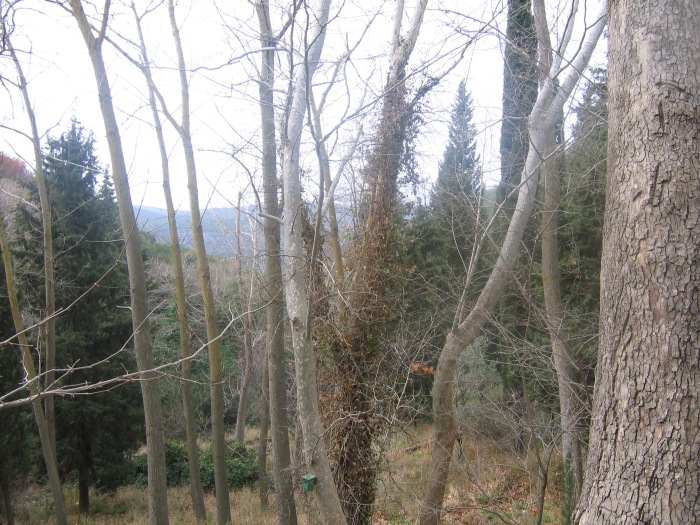 I’ve got dozens of various shots of nothing but the woods from all across the world. Two of my favorites are on my desk, one from American and one from Japan. I’m always struck by the differences and similarities between them. Wherever you are, the woods are always similar enough that you can recognize ideas, feelings, trends that join you to that remote location. In the sense that the woods near your own home and country do much the same. It’s that spark of fellowship and belonging that most closely identifies us as part of one human race and planet. It’s only there for a moment, but it’s a good feeling. Nature, God, whatever, does that to you. Amen.