About a year and a half ago it was Dead of Winter. Outside I think it was about 15 degrees with eight inches of snow on the way. I get home and there’s this cat on my doorstep, hanging out, and meowing. I love my dogs, my brothers both have cats, but I don’t know anything about cats. Cats baffle me because I’m so used to dealing with dogs.

My neighbor is a kind retired doctor. So he and I figure out the cat’s without valid identification, kitty’s papers were apparently expired. So we get the idea we should at least feed the cat. Somewhere in my memory I had heard that if you feed a stray cat it becomes your cat. Seeing as how I didn’t want a cat, I worried feeding the cat was a bad idea. Nevertheless the cat seemed hungry and thin. So my neighbor gave him a little canned tuna and I gave him a little of my dog’s kibble. If you’re a cat owner, and are horrified by these meal choices, I once again reaffirm I have no idea if these are valid cat nutritional options or not.

Anyways, after the cat’s done eating, he and I begin to wonder what to do to prevent kitty from freezing to death or dying in the forthcoming snowfall. Kitty’s running around like a crazy person, and eventually sets up shop underneath my still warm car frame. My neighbor eventually lost interest. So I’m outside freezing and alone with this cat under my car. And I get it into my head that unless I get this cat indoors, it’s going to die overnight and it’ll be all my fault. But I don’t know nothing about cats. And I can’t keep a cat in my place because my dogs will kill it or the cat would kill them.

So I spend an hour calling cat shelters or whatever. Nobody wants to pick up their phone. Or they are of the mentality of, we’ll take the cat from you, and then kill it. Holy shit! [slams phone receiver] For the uninitiated, slamming your phone is the most popular smartphone app of 1987. In the meantime, kitty is either underneath my car or on my doorstop meowing constantly. Finally the local city animal control calls me back. This kind young woman is all helpful, but offers a weird solution. She’ll take the cat, but nobody ever claims cats, so you should just leave the cat alone otherwise it’ll never get home, if it has a home. Oh, uh, …

Remember, I’ve got it in my head at this point that this cat is going to literally die unless I save it. So I tell the woman thanks and I keep dialing. Finally I get a hold of a shelter that will take the cat, not kill it, and get somebody to adopt it if nobody claims it. They are a half hour away. It’s getting dark, my escapade with the cat is now two hours old, I’m freezing, my dogs are hungry, but with this news from the shelter my heart soars. The cat will live.

Anybody ever try and get a cat to go somewhere it doesn’t want to go? I hadn’t. Kitty would not let me pick him up. Kitty had to be bribed with more dog kibble. Then I could pick up kitty. But kitty kept trying to scramble out of my hands and I was worried kitty would claw my eyes. I could get kitty in hand, get close to my car, and chuck kitty in the backseat. But kitty was so quick, he would always manage to jump out of the car before I could shut the door. Cat was literally a blur of fur the dude was so fast.

Eventually after an hour of this I could no longer feel my frozen hands. It’s pitch black now. And kitty jumps out of the car for the twelfth freaking time, and runs off. Cat’s gone. So I walk around for a half hour trying to find the cat. I never did. After three and a half hours I went inside, defeated, certain kitty was not going to last the night. I had failed kitty, it was on me. I think it snowed ten inches overnight.

Yet a week later, I see kitty gleefully chasing another cat around the neighborhood. I stopped where I was in my tracks, and just started laughing like a lunatic. Darn cat’s alive! It was a true six year old Christmas morning moment. It made my month. I hereby dubbed kitty at that moment Nautilus Kitty, for his ability to survive arctic weather on his own.

I don’t know if Nautilus Kitty is a stray, or is owned by a neighbor. Nobody has ever claimed Nautilus Kitty as far as I can tell. I see him about once a week or so, in all weather. I don’t feed him, I don’t try and save him, because I know he’ll be alright. Occasionally I see Nautilus Kitty conning a neighbor for food. Even my doctor neighbor feeds him every once and a while, I’m not sure if he remembers meeting Nautilus Kitty originally or not?

But Nautilus Kitty never begs me for food or says hi. I guess he’s still angry at my failed kidnapping attempt. I’ve tried to take Nautilus Kitty’s picture for years, but he’s too quick, and runs when I approach him. So this shot is the best I could do recently. So you play Where’s Waldo and find Nautilus Kitty’s blur in this photo. For the uninitiated, Where’s Waldo is the most popular smartphone app of 1993. 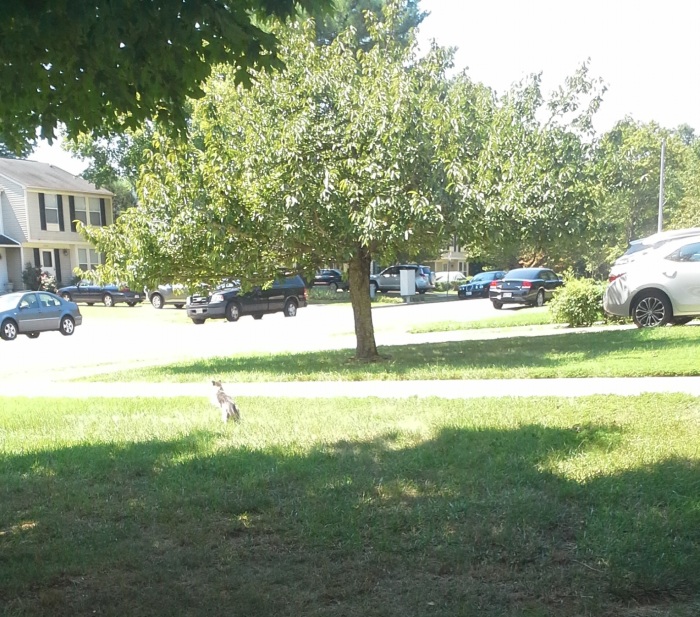 All Hail Nautilus Kitty! Who cannot be slain by weather, or dogs, or other cats, or dragons, or whatever. Turns out the animal control woman was right after all. Nautilus Kitty endured.

One thought on “All Hail Nautilus Kitty”