I’ve never played Pokemon Go.  I never will.  So this post is more an observation vice a review.  Although if actually reviewing said game as a game, instead of a piece of likely clever and ingenious technology, I’d give it negative twelve stars.

I don’t get the human race.  Sometimes I feel like a darn alien inhabited my brain.  And he’s looking around at the goings on and he’s like, “What?  Huh?”  But basically, Pokemon Go is augmented reality.  Not a true game.  Not true virtual reality.  Something in between.  I’ll spare you the details.

But basically you walk around the real world and see the real world, but Pokémon is there too.  You can see him.  He’s over there getting fries at the drive thru window and you have to go up and say hi to him.  Or whatever.

It took humanity’s greatest leaps in technology to make this happen.  And even then servers are still crashing.  So instead of using all our powers to battle cancer or go back to the Moon, we’ve got finding Pokemon down by the Sizzler.  Uh, okay.

Hey you know what, I’ve got an even better version of Pokemon Go.  And my version is free.  It’s also augmented reality.  It’s called my freaking imagination.  Instead of picturing Pokemon, I get to pretend I’m battling dragons, or passed out drunk on the curb, or exploring this thing called a forest when I hike through it after removing the battery from my smartphone first.

Put down Pokemon Go.  Pick up your imagination.  You shall not regret it. 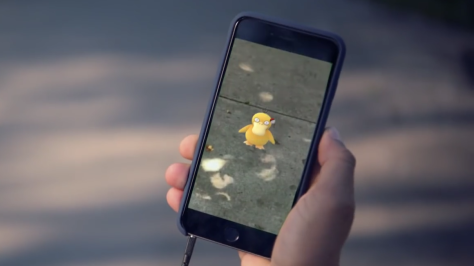