There’s a lot going on in the world recently.  Sochi rumbles on; a volcano does what volcanos in Indonesia do; Bieber’s not been donated for terminal medical science, yet; the Italian PM just resigned so his teenage son could replace him; oh, and in Central African Republic (CAR), genocide is in progress and nobody seems to know or care.

But wait, I thought we were past this?  Everybody’s heard of Rwanda right?  Bosnia?  Darfur?  Sure, those are times where we (the international community) either got it right or wrong but at least we talked about it, used it to guide our actions.  By the way, Darfur remains a nightmare shithole of anarchy, starvation, and suffering despite the presence of over 15 thousand UN peacekeepers.  Which I guess is my point.

For those of you who think Africa has a lot of pandas, let me bring you briefly up to speed.  CAR is dirt poor, isolated, and hasn’t had a functional government in just about forever.  A Muslim based militia overthrew the government and took control.  But then the militia got out of hand and started a little weekend ethnic cleansing.  So the Christians overthrew the militia with the help of French and UN peacekeepers.  But now the Christians have gotten in on the scrubbing game as well.  I guess everybody thought they just needed to clean up the country a little.  Maybe they should have just used some bleach on their kitchen floors.  Less blood would have been involved.

There are about 4.4 million people in CAR.  Of these, 20% are now homeless, about 800 thousand people.  Nearly every single one of them is going to need support to live.  The country is nearly the size of France.  Since this round of violence began, probably tens-of-thousands have died, but nobody really knows.

So yet again, we (the international community) are on it.  After Rwanda, we said “never again”, and we meant it.   We’ll make sure genocide is stomped from human history because it is the antithesis of everything we want in our modern, free world.  Never again my friends, never again!  (pounds fist on podium)

“Some 7,000 troops – from France and African countries – have been mandated by the UN to help restore order.  But so far they have failed to stop the unrest…”

So this is a problem right?  We don’t like genocide.  Wrong.

Everybody’s cool with it!  Consult any newspaper, website, and/or ancient totem scroll today and you will find CAR buried in Section D12, behind the article on liver enzymes.  Nobody cares!

Now most of you will probably respond with something like this:  There’s nothing we can do.  Let them have it out.  If we get involved, we will either make things worse or get dragged into turmoil.

Well, you’re only partially right.  Getting involved in this is like inserting yourself into a bar fight.  You likely can’t stop it, there’s two of them and one of you.  You’re probably going to get punched in the face.  And in the end both guys will hate you for entangling yourself in their Glorious Battle.  But, that doesn’t mean you should do nothing.  And it doesn’t mean there isn’t something you can do to help.

We are doing something, you’d say.  The UN, EU, AU, LPGA, NFL, and France are on the case.  They’re taking care of it as best as we can given the circumstances!

I submit though, that what we are doing is worse than nothing because it isn’t working.  The international community’s method of genocide crisis response is broken.  We need a new way.  We need to make a choice between two options.  I’m ruling out a third option in which hundreds-of-thousands of international troops flood CAR to reestablish order as just unrealistic given how little the planet actually cares.

Replace the UN motto of “never again” with “we don’t give a shit”.  We accept that we are cool with genocide occurring on our planet and we practically and morally wash our hands of what our planet will look like in 2090.

The UN needs an actual army.  Not peacekeepers.  Not a police force, but a small rapid response combat force.  Similar to what the UN just used in Eastern Congo, but larger, and guided by formal policy.  Say about ten-to-twenty thousand troops from various nations.  Highly trained & equipped.  You drop them into CAR, or wherever hell has opened.  They reestablish order on the streets, halt the immediate violence.  Anybody holding a weapon or committing a murder gets shot.

Will this solve CAR and provide a brighter future?  No.  Will this guarantee that all genocide will stop?  No.  But it will at least stop the bleeding.  If you can halt the killing for a few weeks, maybe that’s all you need to calm things down and provide an open space for folks to work with.  Then you can roll in the peacekeepers and start the hard work.

Maybe not the best idea, but again, when what you’re doing is clearly not working.  It’s time for a change. 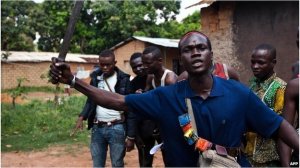 This fine gentleman is serious about doing what he says.  We’re not.