This last week I took a mandatory class in what was essentially a business process system.  Did I mention the word mandatory?  I did not want to take this class.  I resisted, told them I didn’t need it, would never use it.  But a few months back I was invited into the office by the boss.

Upon entry the boss locked the door and I found the section supervisor was in the corner wearing a ski mask.  He’s an odd guy but this struck me as a little weird.  I tried to discuss my latest action plan but they shoved my head onto the desk and put a revolver to my temple.  “You’ll go!”  “Sign it!”  They screamed.  I cried.  I soiled myself.  Thought of who would take care of my dogs, but over the course of a mind melting twenty minutes I enthusiastically agreed that a week-long class on this business process was well within the best interests of the organization.  And myself!  So off I went, happy as ever.

The class was not the misery I expected it to be, but two things stuck out:

1)  Attended by dozens of people from a dozen different organizations.  All are supposed to use this business process.  None of them do.  Everybody just ignores it and does whatever the fuck they want.  It’s the height of organizational stupidity.  People are probably making billions off a system that is so irrelevant, folks will spends weeks, months, years to learn it down to the smallest detail, but then nobody uses it to conduct real work.

Some optimistic folks have this hundred year rule to describe the pointless nature of life.  As in, who the fuck cares, in a hundred years we’ll all be dead.  It’s like remarking to your neighbor the weather is nice today, before you ask him what color you think his skeleton will be after six years in the drink.

I’ve found this rule a rather poor way of looking at things.  If we all truly believed it, then why aren’t humans feasting upon each other’s flesh in the streets?  You might think I’d be the first person to claim it’s the giant octopus keeping us all under control.  But I’m going to go more along the lines that what we are built inside of goes a little deeper, it’s quite special.

So I have a different way of looking at the darkness.  It gets to the depths of servitude, you know, the kind that wastes human life and aptitude; robs us of our ingenuity and drive.  It’s not in our base nature, we just do it to ourselves.

Anybody ever walked to work via an underground mall and/or subway tunnel before?  At like seven in the morning; say about four-thousand of your best friends trudging their way across concrete on the way to the elevators, escalators, stairs, transporter room; on the way to their cubicles, boxes, corner offices, whatever.  It’s like you’re adrift in a sea of rotting human meat, all of it floating along into the vortex.  Nobody says a word.  All you hear is the mindless clicking of thousands of shoes and heels.

When I see those business pictures, that’s what I think of.  You know what?  I’d rather they put the skeleton up there during the business discussion.  At least that’d be honest. 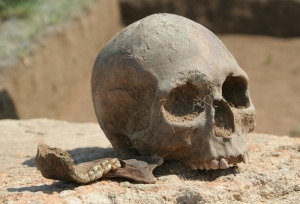 “Are you up to speed on your latest metric quals?”