So this will take a moment or two to explain. I wish I could blame this forthcoming lunacy on alcohol, but it’s the middle of a weekday and so sadly I have no reasonable excuse to justify my insanity. So first off, the source of today’s rank confusion with humanity is this weird article from the BBC about how morons are still buying Hitler’s art:

I especially like how the BBC wraps their article with this one liner about Hitler:

“He went on to become Germany’s military and political leader from 1933 to 1945, launching World War Two and causing the deaths of millions.”

For some reason they wrote this line in a non-dominant, weak voice; like Hitler was just some disgruntled toll booth operator who spray painted his bosses’ car.

How about this instead, BBC:

“He went on to brutally acquire the title of Germany’s military and political dictator from 1933 to 1945, attempted to conquer Europe and committed cultural, physical, and emotional genocide against tens of millions. Nobody misses him.”

Oh man, there’s so much else wrong with this:

1) They held the auction in Nuremberg; maybe they could have bothered to not hold a Nazi themed auction in the city where they all got put on trial for crimes against humanity

a) An attempt by freaks to study the art in order to establish some kind of window into the mind of a monster?

b) Some freak just really wants to show off a piece of art painted by one of history’s great monsters?

We’ve already covered (a) on this blog previously:

And if it’s (b), then there are some really, really sick people out there. I could probably get $1.5M just by fraudulently claiming I had possession of Genghis Khan’s chamber pot.

If you’re foolish enough to read this blog on a regular basis; you’ll already know my broad position on free speech. But I’ll make humanity a deal, if you murder north of 10 million people, you get your free speech rights revoked.

In the first season of Justified, there’s a neat little subplot where Robert Picardo plays an art dealer who buys Hitler paintings and then destroys them. Says The Doctor to Seth Bullock, “So I buy Hitler’s shitty paintings — and I burn them.” 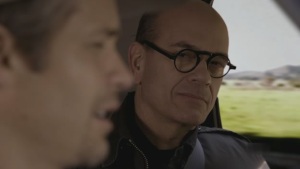 And so I wish I could acquire the cash necessary to outbid these idiots in the BBC article. I overbid them by one dollar each, just to mess with their sick heads. I get Hitler’s paintings, Olyphant stands next to me armed with both a Glock and a Colt to keep away the haters, and Picardo breaks out a bottle of bourbon.

We douse Hitler’s shit in bourbon, set it alight in front of everybody, and then we three take a swig of bourbon. Then we give Hitler’s ghost the finger. Then we carry on with our daily lives.

Oh, Hitler dude, we’re just so very sorry for what’s happened to you in your past. If only somebody had liked your paintings, maybe you wouldn’t have tried to liquidate the human race. That must be the reason you did all those horrible things. Poor Hitler.